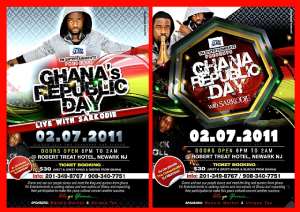 Well all you die hard Sarkodie fans, Ghana Music.com is proud to announce that the fastest rapper in Ghana will be making a debut in US this July.

Sarkodie is so hot right now, having already clinched a distribution and clothing line deal with Konvict Musik owned by the third most richest billionaire musician, Akon.

Michael Owusu Addo better known as Sarkodie will also be making his first appearance in New Jersey and the good thing about it is that fans of him get to listen to his "Rappaholic" album first before Ghanaians in Ghana do. So don't be late when the doors open at 8pm at Robert Treat Hotel, in Newark, New Jersey.

The concert is also expected to be beefed up with the finest Ghanaian musicians already based in the states.

Before Sarkodie comes on stage, DJ Mensa (Michael Mensah Ayenu) will be dishing out good Ghanaian music to the attendants.

According to the organizers of the show additional information will be announced shortly.

They Sent 'Dante Crocodiles' To Our Area To Scarce Us — Ajum...
41 minutes ago