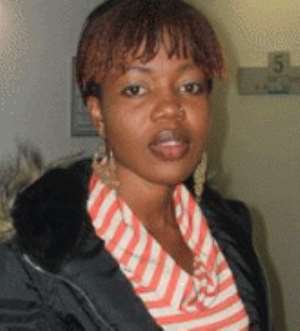 Her two accomplices are Maxwell Mensah, a businessman, and Emmanuel Edem Lordzoh, a student.

The three, their family members and followers were thrown into a state of shock when the trial judge, Mr Emmanuel Plange-Brew, decided to remand them until Friday, June 10, 2011.

Mzbel, who wore a dark dress with dark sunglasses to match, was seen making and receiving several phone calls while being instructed by her lawyers before the trial judge entered the courtroom.

The two also pleaded not guilty to the charges.
The accused persons were alleged to have committed the offence with a Mitsubishi vehicle, with registration number GR 9470-11, at Tudu in Accra about 12.40 p.m. on June 4, 2011.

Earlier, lead counsel for the accused persons, Mr Addo Atuah, had denied the allegations levelled against his clients and said there was a video recording of the incident and at the appropriate time the court would have the opportunity to arrive at the truth.

He said it was impossible for a frail-looking person like Mzbel to assault a police officer, adding that he would prove the innocence of the accused persons in due course.

Mr Atuah gave the assurance that his clients would avail themselves for trial and that they all had fixed places of abode and were, therefore, in a position to meet the bail conditions.

Prosecuting, Chief Inspector Dora Seiwaah, said the accused persons parked their vehicle at the wrong side of the road on the said date, leading to heavy vehicular traffic.

The prosecutor said the police officer observed that the car's ignition was on, while Mzbel and Emmanuel sat in the vehicle.

On seeing the police officer, who asked why the vehicle had been parked in such a haphazard manner, Emmanuel moved to the front seat to move the vehicle from where it was parked.

According to the prosecutor, Maxwell allegedly moved the vehicle and attempted to hit the police officer, who managed to jump onto the bonnet.

Not satisfied, Maxwell allegedly sped off and drove the vehicle in a zigzag manner in his bid to throw the police officer off the bonnet of the vehicle, to the shock of onlookers and other motorists.

A bullion van which was on the scene tracked Mzbel's vehicle until it managed to cross it to stop Maxwell from injuring the police officer.

The policeman then made an attempt to arrest Maxwell, but the policeman was allegedly assaulted by Mzbel, who claimed ownership of the vehicle.

Inspector Seiwaah said Mzbel and her alleged accomplices would have been lynched by a mob if they had not been taken from the scene of the incident.