Winnie Mandela angry at not being consulted on new movie 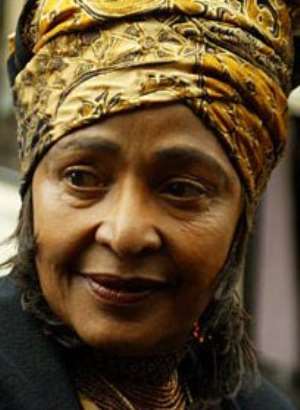 
Winnie Madikizela-Mandela still isn't supporting a film about her life starring Jennifer Hudson, but she tells CNN that it has nothing to do with the Oscar winning actress.

“I have absolutely nothing against Jennifer, but I have everything against the movie itself,” she told CNN's Nadia Bilchik.

The film, titled “Winnie,” has sparked controversy not only because an American was cast in the role rather than a South African actor, but also because Mandela sought to impede the film's production.

“I was not consulted,” she tells CNN. “I am still alive, and I think that it is a total disrespect to come to South Africa, make a movie about my struggle, and call that movie some translation of a romantic life of Winnie Mandela.”

Director Darrell Roodt ("Cry, the Beloved Country") has described the film as "the ultimate women's movie" and "an amazing love story," as he did to the press at Cannes last year.

"I think it is an insult," Mandela told CNN of the film. "I don't know what would be romantic in our bitter struggle.”

Hudson never met with Mandela, but a rep for the actress told CNN that it wasn't because Hudson didn't want to. The singer, most recently cast in the "Three Stooges," would have loved to meet the activist, her rep said, but the producers thought she shouldn't. The film is based on the book "Winnie Mandela: A Life," and a producer said they wanted to uphold the integrity of the book on which the story is based.

Covid-19: Journalist, Others Sentenced For Flouting COVID-19...
1 hour ago