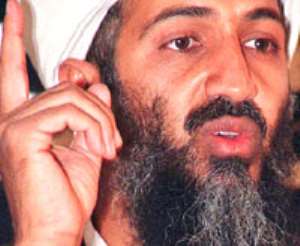 Not too long after Obama had announced the death of Osama Bin Laden, two movie producers in Ghana's culturally suave city of Kumasi, home to the twi movie industry, are already fighting over who will be the first to produce a commercial movie with the title Osama bin Laden.

Information coming from the burgeoning movie industry in Kumasi indicates that two movie producers are fighting over the movie title “Osama Bin Laden”- (part one and two).

Jones Agyemang, who is the C.E.O of J.A. Films, whose name was mentioned in this development, said there is a big competition in the Twi movie industry for movie titles.

He cited an instance where the choosing of a title for a movie, “All Die Be Die” became contentious, when Samuel Ofori, a movie producer, visited the set where his (Jones Agyeman)  film was being shot, and within some few weeks, he was told Samuel Ofori was also shooting a movie with the same title.

Due to that, he did not go ahead to fight him because he also had the right to name his movie whatever name he chooses, so the one who will bring his movie out first will be the owner of the movie title. He also lamented that now everybody is hiding his own movie title and won't tell if he or any other producer is shooting “Osama Bin laden”.

The issue about who owns a movie title does not only pertain among the Akan film producers in Kumasi, but also happens in Accra. For instance, when the issue of 'Sakawa' became rife, most of the glamour film producers came out with different versions of 'sakawa' titles.

Mr. Agyeman said, “when I choose a title for my movie and I realize some one has come out with the same title, I think it's an opportunity to re-frame my title but not to change it totally”

Frank Fiifi Gharbin, who won Best Director in the Ghana Movie Awards 2010, also contributed to the interview by saying he cannot also give out the names of the producer(s) shooting “Osama Bin Laden”, but what is wrong about the whole drama is,”If you are not one of the top producers and you end up shooting Osama Bin Laden before another top producer shoots his, you have to change your title even though you shot your`s first”.

“The most interesting thing is that sometimes you watch some of the movies with a controversial title and you will find nothing closer to the title chosen, the only thing they look at before choosing the title is the marketing aspect and not the content, and this is very bad ” he added.