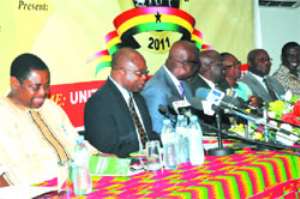 The Minister of Youth and Sports, Clement Kofi Humado says failure to organise the National Sports Festival, now National Unity Games, in the last seven years is partly to blame for the litany of disappointing results chalked up by the various national teams in recent times.

According to him, the grass root, which produces sporting talents in all the various sports disciplines have been neglected, for which reason the country's performance in sports is taking a dip.

He has, therefore, commended the National Sports Authority (NSA) for the decision to factor colts' soccer into the list of twenty sporting disciplines to be competed in, during the National Unity Games slated for Accra in July.

He expressed the hope that the inclusion of colts' soccer in the National Unity Games would ensure the unearthing of more future talents for Ghana football and the other sporting disciplines.

'Colts' Soccer has a large following in the country and I am not surprised that all the Regions are presenting colts teams for the National Unity Games.

'It was through colts' soccer that the Abedi Peles, Stephen Appiahs, Asamoah Gyans and Michael Essiens, to mention a few, were all unearthed', he remarked.

He said the importance of colts' soccer is what drove the President, John Evans Atta Mills to express concern about the neglect of soccer at that level.

At the ten-day games, which is being held under the theme, 'Uniting the people through sports', about five thousand sportsmen and women from all the regions, the Security Services and tertiary institutions will vie for honours in twenty sporting disciplines.

Touching on the theme, 'uniting the people through sports', the minister said the games has the potential of unearthing talents among the youth for the development of sports in the country.

He noted that it is high time Ghana engaged her youth in programmes and activities geared towards inculcating in them a greater sense of discipline, patriotism and unity of purpose since discipline and patriotism are at their lowest ebb in the country currently.

He pointed out that not only do the games have the potential to unearth talents, but in addition to that, it has the potential to   promote peace and national stability. 'The National Unity Games has a proud history of unearthing talents, who eventually became heroes and heroines.

'Its collapse for the past seven years, partly explains why Ghana has of late not been faring well in international competitions such as the All Africa, Commonwealth and Olympic Games'.

Making references to political unrest in North Africa and the Middle East and the post-election crisis in neighbouring Cote d' Ivoire, he cautioned that Ghanaians should not take the peace they are relishing for granted.

It is against that background that he expressed satisfaction and gladness for the renaming of the National Sports Festival as 'National Unity Games' and also described as very appropriate and timeous, the choice of the theme, 'Uniting people through sports'.

On his part, the CEO of the National Sports Authority, Mr. Worlanyo Agra expressed confidence that as the festival has done in previous years, it would unearth budding talents to strengthen the national teams for the All Africa Games, which comes off in Maputo, Mozambique in September and the 2012 London Olympic Games.

He said renaming the festival was predicated on the National Sports Authority's desire to keep the rebranding spirit of the authority alive, unite Ghanaians as well as bring all stakeholders and interested parties in the web of Ghana sports together.

When it kicks off, the National Unity Games will be under the patronage of both the President of the Republic of Ghana, Professor John Evans Atta Mills and his vice, John Dramani Mahama.