Spotify cuts back on free music 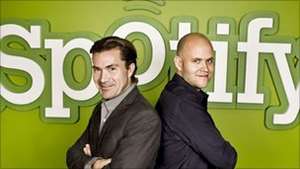 Online music service Spotify is halving the amount of free music that users can listen to.

Users of its free service will be limited to 10 hours per month, half the time currently offered and will only be able to listen to tracks five times, from May.

New users will get six months of free content before the changes kick in.

The news has angered fans who accuse the firm of seeking to change its model from free to paid.

This is something denied by Spotify.
Ken Parks, Spotify's chief content officer told the BBC: “Our chief priority is to keep the free service, which is what has made Spotify so popular.

“We're a company whose ambition is to offer all the world's music to everyone which means growing the business and our user base to many times its current size.”

“Everything we do is designed to ensure our users continue to have access to an amazing free experience,” he added.

Last month, the online music service announced that it had one million paying subscribers across Europe.

But the majority of its 6.67m listeners use the free service, which is subsidised by adverts.

So long
Announcing the new plans in its blog http://www.spotify.com/uk/blog/archives/2011/04/14/upcoming-changes-to-spotify-free-open/ the firm said that the changes – which begin on May 1 – would mainly affect heavier users.

“Most of you use Spotify to discover music – on average over 50 new tracks per month, even after a year,” it said.

“For anyone who thinks they might reach these limits, we hope you'll consider checking out our Unlimited and Premium services.”

Experts have said that Spotify's long-term profitability depends on users switching to the premium services that remove adverts and allow listeners to use smartphones.

“The economics of ad-supported music services just don't add up and Spotify can't survive long-term while it haemorrhages money from its free service,” said Mark Mulligan, an analyst with Forrester Research.

One of the big issues for services such as Spotify is the fees demanded by the music industry – which work out at around 1p per play, according to Mr Mulligan.

“The record labels don't like having a permanent free service around, it is like sleeping with the enemy.

“But too many people expect music to be free now and if there are no legitimate free services it will drive them back to the illegal sector,” he warned.

The first response on Spotify's blog read: “So long Spotify. It was nice knowing you. Guess I'll go back to pirating music again then.”