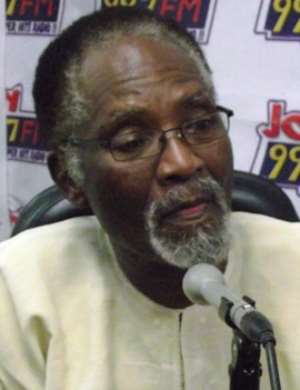 His antiquity is enormous - a master class perfectionist who dwells in the English language and its chemistry. Prof Atukwei Okai is no stranger to fluency - a world class English literature physician.

"He is one of God's greatest gifts to this generation…" Albert Ocran, CEO of Combert Impressions defines him.

He was the guest on Personality Profile on Drive Time on Joy 99.7 FM with Kwabena Anokye Adisi - Bola Ray Thursday and it was a night filled with poetry and knowledge.

Oh what a night it was: Unwind me Joy; Unwind me 99.7; Unwind me Super Hits Radio. - with a huge claim that, “we were rapping before rap came,” he jovially proclaimed.

Whiles he poured out his countless experiences and fond memories growing up, it was evident this selfless personality still has a strong belief in Ghana and Africa – a key part of his life's mission.

“A big part of my life and mission has been for us to succeed in proving that we can make it as a people, we can make it in Ghana and Africa and that we have got what it takes, we have the people,” the Professor emphasized.

He declared that he has made it a point, “to try to gain so much in terms of what is necessary to build myself to be able to serve and to take pains to let this serve society and inspire people with the understanding that knowledge, expertise and talent are useless if they are not used to serve,” adding, one does not acquire all these and feel big than others.

Having spent most part of his early life in Gambaga in the Northern region, Prof. Atukwei, who is a Ga by birth, says he is always proud to declare himself a Northerner due in part to the fact the natives value and treasure their culture.

“When a people are proud of themselves and depend on themselves; the food, the architecture, their dress, everything from their wealth, they don't wait to import things from outside, that is one thing that has given me great faith in grounding as a Ghanaian, as an African, the self reliance of the people of Northern Ghana. So I even always declare myself as a happy and proud northerner,” he noted.


Atukwei Okai was born in Accra, Ghana, in 1941 and was educated at the Gambaga Native Authority School, Nalerigu Middle Boys' School (both in Northern Ghana), Methodist Middle Boys' School (Accra) and the Accra High School, before going to Moscow in 1961, where he earned his M.A. (Litt.) from the Gorky Literary Institute in 1967.

He obtained his Master of Philosophy (M.Phil) degree in 1971 from the School of Slavonic and East European Studies at the University of London, U.K.

A Fellow and Past President of the Ghana Association of Writers (GAW), he is the Secretary-General of the Pan African Writers' Association (PAWA).

Okai's poems have been translated into several languages and have appeared in anthologies and several prominent international journals. He has performed his poems on radio and television, and venues throughout the world.

His published works are Flowerfall (poems), (1969, by Writers' Forum. London); The Oath Of The Fontomfrom and Other Poems, (1971, by Simon and Schuster, NewYork, U.S.A.); Lorgorligi Logarithms and Other Poems (1975, by Ghana Publishing Corporation, Tema, Ghana).

The others are The Anthill In The Sea (verses and chants for African children) (1988); Freedom Symphony: Selected and New Love Poems (2008); Mandela The Spear and other poems (2008) – all by the Ghana Publishing Company, Tema, Ghana.

Okai is a recipient of many national and international awards, such as The label Centenary Commemorative Gold Medal - (1979), The International Lotus prize (and Gold Medal) - (1980), and The C. Marconi Gold Medal of Italy - (1986).

Others are The Ghana Book Award - (1979), accorded him, “in recognition of his signal contribution to the development of national literature” and the ECRAG FLAGSTAR - (1991).

Okai was presented with The Ushio Publication Culture Award of Japan, in 1993. In 1998 the University of Ghana Golden Jubilee Distinguished Scholarly Award did “acknowledge his outstanding contribution to the development of African poetry”.

In June, 2007, the National Award of Member of The Order of The Volta was conferred on Prof. Atukwei Okai by the State.

Listen to the attached audio for a life changing adventure and Bola Ray dig deep into this Statesman's heart.