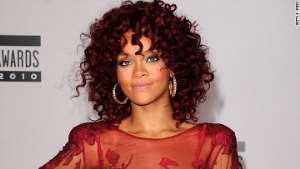 
Rihanna has taken aim at her father for selling tall tales and candid family photos to the tabloids.

In a revealing new Vogue magazine interview, the Bajan beauty admits her father's actions make her question exactly what she means to him.

She says, "It's really strange you grow up with your father, you know him, you are part of him, for goodness sakes! and then he does something so bizarre that I can't begin to wrap my mind around it.

"You hear these horror stories about people going behind people's backs and doing strange things, but you always think, 'Not my family. My father would never do that to me.'"

And the Umbrella singer was particularly upset with what her father told the media after she went into hiding following her assault at the hands of ex-boyfriend Chris Brown.

Rihanna adds, "My dad went to the press and just told them a bunch of lies, because he hadn't talked to me after that whole thing.

"He never called to find out how I was doing, if I was alive, nothing. He just never called. He went straight to the press and got a cheque."