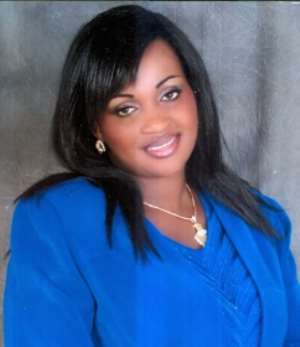 
Sensational gospel artiste Herty Born Great has set her eyes on all award categories she has been nominated in at the 2010 Ghana Music Awards festival.

Herty, who is a new entrant into the Ghanaian gospel music scene, has made great strides as her hard work has been recognized with four nominations: no mean feat for a new entrant.

Her new album titled Odo ben ni, which projects her strong vocal abilities has received tremendous airplay since its release.

The stunning songstress has been nominated for Gospel Artiste of the Year, Discovery of the Year, Gospel Song of the Year and Best Female Vocal Performance.

Being her maiden album and nominations in the Ghana Music Awards, the talented gospel musician has already touched the hearts of gospel music lovers in the country.

Herty known for her silky voice and electrifying performances released her Odo ben ni album last year. The new sensation hopes to sweep the awards in all four categories.

The album which contains nine tracks - a mixture of worship and praise medleys - adequately portrays her vocal dexterity and depth.

A statement issued by managers of Herty, says she is billed to perform at the special anniversary convention of the Charismatic Evangelistic Ministry (C.E.M) at the Rehoboth Temple, North Legon which begins on Wednesday 9th March.

"She will be performing before great men of God such as, Pastor Mensa Otabil of ICGC, Rev Steve Mensah, General Overseer C.E.M and Pastor Mathew Ashimolowo of the KICC, UK," the statement added.