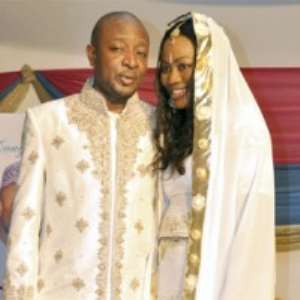 The traffic holdup on the main Dzorwulu road, right from the traffic intersection, in the afternoon of Saturday, was understandable.

The 2002 Miss Ghana personality, Shaida Abiodun Buari, was being wedded to Olukunle Olusola Nubi, an IT consultant domiciled in Nigeria.

The bridegroom, who shuttles between Lagos and Accra, consults for major IT networks in the country. It has been suggested that it was during one of such trips that he met the lady who eventually turned out to be his better-half.

The smiles on the countenance of Alhaji Sidiku Buari, one-time President of the Musician Union of Ghana (MUSIGA), were understandable, having finally come to the end of a long period of planning for the great day.

It was also perhaps an opportunity for him to showcase his new-look Sid Theatre, which towers over the nearby buildings in the neighbourhood.

In spite of its capacity, the ground floor of the yet-to-be commissioned multi-storey structure proved inadequate for the many guests. It was the adjoining car park space which seated the other guests and served as the point for eating and drinking.

The guest list from Nigeria was a long one. About 300 persons from Nigeria had to find accommodation in hotels as they prepared for the great day, which turned out to be uneventful. Prominent among the local guests was former Vice President Aliu Mahama.

The bridegroom hails from a renowned family in Ijebu Ode, Nigeria, as is his wife is from the Buari family of Accra.

The Nigerian culture was in full flight with women dressed in uniformed fashions and matching headgear.

The flowing agbadas of the men and uniformed blue caps differentiated friends and family members from others who turned up to have a glimpse of what was going on. For others, they stole glimpses from the windows of their houses.

The function could not have been better than what was put up by the Buari family and their Nigerian counterparts.

The one-time Miss Ghana has already taken up residence in her new home as her family members rearrange the venue of the event.

As for the bride and bridegrooms, their wedding gear was a thing to behold by both fashion designers and amateurs alike; it was superb and appealing.