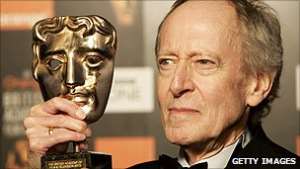 
Composer John Barry, famous for his work on Born Free, Out of Africa and the James Bond films, has died in New York of a heart attack aged 77.

His arrangement of Monty Norman's James Bond theme led to him composing scores for 11 films in the series, among them Goldfinger and You Only Live Twice.

His work saw him win five Oscars, while he received a Bafta fellowship in 2005.

His most recent film score featured in the 2001 war thriller Enigma, while a musical version of Brighton Rock, created with lyricist Don Black, had its London premiere in 2004.

Black, who worked with the composer on his Born Free, Thunderball and Diamonds are Forever theme songs, said Barry remained unaffected by his international success.

"The thing about John that I will always remember was he never changed," he said.

"He was very much the Yorkshireman, whether he was in Beverly Hills or Manhattan."

Sir Tim Rice - who worked with Barry on All Time High, the song heard over the title sequence of 1983 Bond movie Octopussy - also cited the composer's roots, remembering the "slight Yorkshire tinge to his voice which he never lost".

"Film seemed to bring out the very best in him," he said of a man who "was able to catch the mood of a scene or a whole film by the genius of orchestration with fairly conventional instruments".

Awarded an OBE in 1999 for his services to music, Barry was renowned for his lush strings, orchestral swells and elegant melodies.

His work found a new audience when Robbie Williams featured music from You Only Live Twice on his 1998 hit single Millennium.

"I am profoundly saddened by the news but profoundly thankful for everything he did for music and for me personally," he said.

"He saw himself as much a dramatist as a composer and his music was inextricably linked to the stories told on the screen."

Jack also remembered him as "a wickedly funny man" whose "passion, genius and sense of humour will be terribly missed by his family and friends".

Close friend Michael Crawford, meanwhile, said he had written "some of the most memorable and beautiful film scores we could ever wish to hear".

Barry's first Oscars came in 1967 for his Born Free score and its iconic title theme.

More Academy Awards followed for the soundtracks he wrote for The Lion in Winter, Out of Africa and Dances with Wolves.

Barry also won four Grammys, a Bafta for The Lion in Winter and a Golden Globe for Out of Africa.

His work for TV included the themes for Juke Box Jury and The Persuaders, while his non-soundtrack work included the albums Eternal Echoes and The Beyondness of Things.

In 2002 he was named an Honorary Freeman of the City of York, an honour he received at a venue in the city where he once used to play trumpet in the 1950s.

Barry, who lived in Oyster Bay, Long Island, is survived by Laurie, his wife of 33 years, his four children and five grandchildren.

His family said funeral arrangements would be private and that a memorial service would be held in the UK later this year.