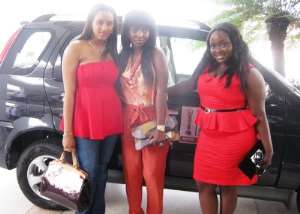 
Close to 48 hours after organizers of the maiden Ghana Movie Awards, GP Limited, held a prize presentation ceremony to handover prizes to the winners of the awards, the SUV for the Founder's Merit Award (Female category) is still parked at the Golden Tulip Hotel.

With the exception of Jackie Appiah who was not at the ceremony, Juliet Ibrahim, Yvonne Okoro and Roselyn Ngissah were presented with a brand new Zoyte SUV 4 wheel drive at the ceremony held on Tuesday.

The four, beat Rose Mensah popularly known as Kyeiwaa to win the Founder's Merit Award as they were crowned Best Actresses in a Leading role – English and Local language respectively.

Unlike, Kofi Adu, popularly known as Agya Koo, who won the Founder's Merit Award in the male category, who drove his car home right after the ceremony, the second SUV for the females is still parked at the Golden Tulip Hotel.

As at the time, 9:30 am, Hitz Entertainment News got to the venue, the car was parked at the exact spot the keys were handed over to the actresses.

This is actually bringing to bare sentiments shared by many that, the four actresses do not know how to go about utilizing the SUV or there could be confusion as who or how the car should be managed.

To make matters worse, the actresses can't sell the car until a year's time. This could have made things easy.

The questions on lips of many industry critics are;

•Did the organizers err in awarding the Founder's Merit Award

to the four ladies when they had only one car?
•If they were able to present statuettes, one each, to the four girls for winning the Best Actress in a Leading role, why didn't they make provision for more cars?

•Did they adequately prepare for the challenges this 'mishap' (using the word mishap cautiously) could bring?

•Will the actresses use the car in turns?
•Or will they leave it there for it to possibly rot.