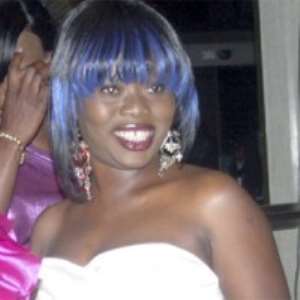 Sensational female broadcaster Delay says she is not dating Ghana's Bundesliga star, Hans Adu Sarpei, who was recently reported by NEWS-ONE to have bought her a $2,000 designer pet dog as her 28th birthday gift.

Though NEWS-ONE, in the said publication, did not say the two were dating, Delay said she received several calls from people asking her if they were dating after peacefmonline republished the NEWS-ONE story with a different headline, 'Football Star Hans Adu Sarpei Buys $2000 Pet Dog For Delay.'

Delay, known in private life as Delores Frimpong Manso, said she did not know and had never met Sarpie in her life.

In the same story that the paper reported, when Delay was asked how she got the dog form Sarpie as a gift, Delay had this to say:

'It is true the dog is a birthday gift form a footballer friend but I am not sure giving the name to NEWS-ONE would be the best thing, knowing what you guys are capable of.

'I love dogs and I have a collection of them but as at now, Biscuits is my favorite.

She takes only chicken, biscuits and milk and has become a part of my family. I did not give her much training to act in 'Afia Schwarzenegger' and I am sure people would love her.'

The dog in question goes by the name 'Biscuits', and is a Shih Tzu breed Chinese imperial dog.

It has been used as one of the lead characters in a new TV series, 'Afia Schwarzenegger', which shows on TV3 every Saturday evening.

Interestingly, Delay says she is currently not dating and her descriptions of which type of guy she would love to date perfectly fits Sarpie.

'I am not dating now but even if I would date someone, I would go in for a younger guy because the younger, the juicier. I love skinny guys; someone who has a clean skin with a great taste of fashion.

A nice guy with a sexy butt- not too big butts but they must be sexy, rich and taller than me,' Delay noted.