Hollywood is my target - Nadia Buari 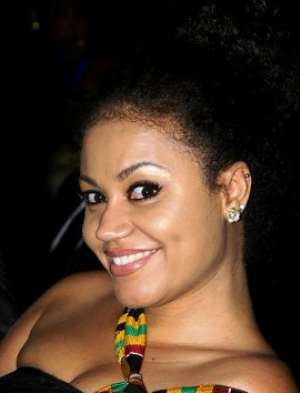 
Nadia Buari is a promising Ghanaian actress who undertakes her professional work of acting with great passion.

She is dedicated to her work and within the last five years when she made her debut on the silver screen she has had a lot of admirers and fans. In fact she is on the verge of attaining stardom.

Nadia knows she is making great impact in the industry and arguably remains one of the favourite film stars on the local scene.

She summed up this feeling when The Mirror had a chat with her at her father's residence at Dzorwulu in Accra when she said, “It's been a smooth journey, but pretty tough. It's stressful and I love what I do and I enjoy it. The experience is very fantastic and I know that nothing comes on a silver plater. It's paid off being in the movie industry.”

According to Nadia, who first appeared on the television screen while she was a student of the University of Ghana, Legon, the opportunity to be an actress came when she went for an audition organised by Village Communications to recruit actors and actresses for a television series.

The producers of the TV series were looking for a lead character in the series Games People Play. She went through the audition and finally landed that lead role.

Since her great and fascinating role, Nadia has received numerous phone calls inviting her to take up roles in various films and other entertainment productions.

Nadia, who has played roles in more than 50 films within the short period of five years, said the experience had been phenomenal.

Some of the films Nadia had starred in included, In the Eyes of my husband, Behind the smile, The King is Mine and Beyonce, which she said was her most favourite because it was the film that gave recognition to the Ghanaian movie industry.

Nadia considers acting as a full-time profession and not a hobby since there are many prospects there for the local movie industry.

According to Nadia, her ambition is to progress in life and be a star actress in Hollywood.

She said she was determined to “keep on acting and engage in entertainment-related shows till I have no breath. However, this will be at the mercy and magnanimity of God.”

Nadia, the first of four children born to a showbiz family, Alhaji Sidiku Buari, a musician and a former President of the Musician Union of Ghana (MUSIGA), and his wife, Khadija, said “I am a reserved person and an introvert.

"As a result, people misconstrue this as arrogance. They think I am loud and arrogant. These traits are things they see me doing in films.”

Nadia explained further that “what people see me doing in films are just characters I am supposed to portray but that's not me.”

Nadia has great looks which cannot be overlooked by anybody who gets close to her. Her warm smile and rich sense of humour makes her the darling of most movie fans who regularly ambush her when she visits public places such as the mall or supermarkets.

According to Nadia, when she comes face to face with the fans they pay her compliments. “They say I look bigger on the screen and much prettier than what they see on the screen. In fact they go crazy about me."

During my interaction with her, I realised that she is one actress who is flexible with time, tolerates criticisms, has great memorizing ability, is ready to change and improve on her performance.

Nadia believes in constructive criticism, especially those coming from her parents, who she said watched the movies she starred in, assessed her roles and suggested how she could perfect her acts.

According to Nadia, her parents always tell her she has enormous talent which she should harness.

She also watches the movies she has played roles in and realises that there were some scenes in which she could have done better. She, therefore, makes amends in subsequent movies.

She said such self-assessment was a healthy exercise which had helped her to improve her skills.

Nadia indicates that though she does not have friends among the film-making fraternity, she maintains good working relations with everybody.

Nadia is a product of the Englebert International School at Airport Residential Area in Accra, where she had her junior high school education and then continued to the Mfantseman Girls Senior High School at Saltpond before entering the University of Ghana to study Theatre and Dance.

The Sunday, November 21 born Nadia has a soft spot for the needy and underprivileged in society and always shares the little she has with them. She has made donations to hospitals, female porters, deprived communities and schools.

She has plans to continue this humanitarian gesture on a large scale and has, therefore, founded the Nadia Buari Foundation to provide her a wider platform to reach out to many deprived persons, communities and institutions. The foundation is scheduled to be inaugurated in June, this year.

Nadia has some great advice for young women and teenage girls. “The most important thing is to believe in themselves, have God in them and lead good lives. Without Him nothing goes on. They should also not let anything stop them, that is the only way to move on.”

Nadia has Beyonce as her role model because she adores her iron determination to succeed and desire to forge on in life.

Her hobbies include watching movies, travelling and hanging out with her family members.