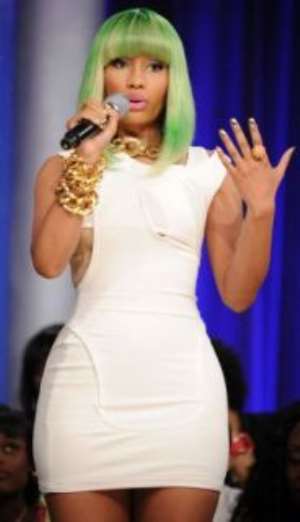 
Whoa, Reege! Fans of Regis Philbin (as well as co-host Kelly Ripa) were rather surprised to see the Live! With Regis and Kelly host get more than a little friendly with musical guest Nicki Minaj on Monday.

But no one was probably more shocked than Ms. Minaj herself, who stopped by the show to promote her debut album Pink Friday. After performing her hit song "Right Thru Me" the 25-year-old rapper chatted with Philbin and Ripa about a variety of things, including her sense of style (Ripa envied her hair, while Philbin was admiring, well, something else!)

When Philbin, 79, began to check out Minaj's outfit, he told the star, "I love the way you dress, this looks like you've got a little strap around you there." After feeling the material on her dress, Philbin then gave Minaj a--how do we put this delicately?--tap on the butt!

A stunned Ripa, 40, cried, "Regis! What just happened?" as an equally flabbergasted Minaj laughed it off. But, it didn't end there for Philbin!

He soon turned the conversation to Minaj's supporter/collaborator Lil' Wayne. When she told them how Wayne's advice to her is "Go hard" Philbin quipped back, "Go hard? I wish I could."

However, it seems Minaj wasn't too offended by Philbin's antics, just surprised. When a fan asked the singer via Twitter, "What went thru your mind when Regis had slapped ya? That was epic!" Minaj responded from her page, "LOL. I was in shock!"

The Nicki's journey up


Nicki is in the latest edition of the Ebony Magazine

She has since taken over airwaves and stolen the spotlight on hit collaborations with industry heavyweights including Kanye, Jay-Z, Trey Songz and Mariah.

In what seems like a blink of an eye, she has garnered a following most rookies can only dream of. She made Billboard history as the first female rapper to have seven songs in the Hot 100 in the same year, solidifying her position within the industry before releasing her first album.

If her 1.4 million Twitter followers and legions of little Barbies (mostly young female fans spouting quirky lingo popularized in her Nictionary) are any indication of what's to come, we may be looking at the return of the female rap phenomenon.