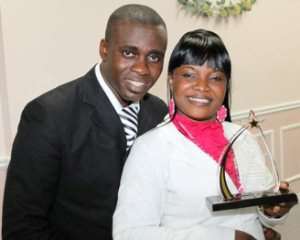 
Sensational gospel musician Ohemaa Mercy has been awarded Ghanaian Gospel Artiste of the Year 2010 in Toronto, Canada at the end of her Europe and Canada tour.

The Europe tour took her to France, Holland and Belgium and it afforded her the opportunity to touch base and show appreciation to her Ghanaian fans in these countries.

The second phase of her tour took her to Canada, her first time in the North American country, where she performed at a concert organised by the Ghanaian Presbyterian Church in Toronto and Montreal all in Canada with hundreds in attendance.

As usual, Ohemaa Mercy performed live with Gye Nyame, a Ghanaian band based in Canada trilling her fans to lovely tunes like Adamfo Papa, Edin Jesus and the ever powerful Wobeye Kese.

She used the event to empower the Ghanaian youth there to make good use of their youthful days.


Ohemaa Mercy performing at the event.

She left an indelible mark in the minds and hearts of the people of Toronto and Montreal so much that, fans asked for a part two of the show.

The Ghanaian community in Toronto in collaboration with the Church of Pentecost McKeown Assembly on Sunday July 4 awarded various Ghanaian artistes who have blessed the people of Toronto over the year.

The event dubbed 'The Church of Pentecost Music festival and Awards night' saw Ohemaa Mercy walking away as the Ghanaian Gospel Artiste of the Year 2010.

The gospel 'minister' is expected to pick another award in the United Kingdom in the coming days at the Africa Gospel Awards 2010 and will continue with the tour in the United States.

Hottest Photo Reports
Catch up with all the political quotes from our politicians.
Advertise here
More Gospel News
ModernGhana Links
Any challenger? Joseph Matthew makes history with 'The Name' music video
I don't have a pen and a book to write my songs - Obaapa Christy
Fredima names Joseph Matthew as new 'king' of afro gospel music
Gospel act MiQ B resurfaces with 'All The Glory' hit song
Our ministry was revealed to us through a prophet – Tagoe Sisters
Tagoe Sisters disclose how they learnt how to sing
Bernice Ansah urges gospel musicians to be peace ambassadors
Gospel Musician Sister Seraphine set to drop visuals for 'Choose'
2021 GUGMA: Jayana grabs Contemporary Artiste and song of the year awards
TOP STORIES