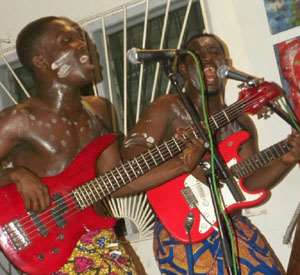 EIGHT YOUTHFUL bands from six regions will on Saturday June 5, participate in the grand finale of New Music Ghana 2010, which was launched in March with a mega concert by the Australia based Ghanaian star, Afro Moses.

Wind Afrique, winners of New Music Ghana 2009 who are currently preparing for a tour of The Netherlands, will thrill the crowd with a series of Afro fusion tracks that charmed audiences in the Zambian waterfall town of Livingstone, in 2009.

Tanga Culture storms Accra with a cool blend of rhythms created with the Korogo, a traditional instrument made popular by Atongo Simba and King Ayisoba, while Youth Home will mount the stage with contemporary northern rhythms.

Royal Echoes, who placed second in the 2009 edition, are coming with a dramatic blend of higlife, jazz and rich rhythms from the Volta Region.

Wind International is expected to entertain the audience with Afro fusion tunes, while Holy Ghost will play a mixture of highlife and gospel.

Afringo and Eden Vibes, groups made up of current and former students of Cape Coast University and Kwame Nkrumah University of Science and Technology, Kumasi, will showcase fine jazz formations that have been effectively blended with local rhythms.

Also comprising of students and graduates of the Music Department of the School of Performing Arts, University of Ghana, Bigshot Band will showcase an interesting blend of diverse styles, including the use of bamboo sticks that create wild rhythms when hit on the ground at specific angles.

Workshops on effective combination of traditional and western instruments, active communication between technical crews and musicians on stage, as well as a talk on HIV/AIDS, will be moderated by flute magician and leader of Hewale Sounds, Dela Botri, Cultural Coordinator of Alliance Française, Cephas Sackitey, and a team from the Ghana Social Marketing Foundation.

The winner of New Music Ghana 2010 will win a recording contract, and will also proceed on a tour of Tanzania, where the group will be guest artistes at the Music Crossroads Festival. The other groups will receive cash prizes, among others.

New Music Ghana is being sponsored by the Danish Centre for Culture and Development (Denmark), Goethe-Institut, and Alliance Française (Accra, Kumasi and Cape Coast).

The Musicians Union of Ghana and Music Department of the University of Cape Coast, are collaborating with the Institute for Music and Development.