R2bees and others rock WAPI, 'I Rep Africa' 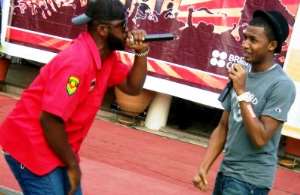 
The headline act for the WAPI 'I Rep Africa' festival, R2bees lived up the billing when they thrilled a pack of fun-loving youths at the Coconut Groove Regency Hotel on Saturday, May 8.

The rap group which flew back into the country from Nigeria, where they are currently promoting their hit song, 'Kiss Your Hand' featuring Wande Coal, climaxed the event which was filled with exciting new and promising talents.

WAPI is a British Council event for Ghana's established stars to come together with the stars of tomorrow, to have fun and network. It was an opportunity for young, upcoming 'creatives' and artists to network with the experts in the field.

The finale event saw musical performances from upcoming rappers and singers interspersed with some performances from the more established acts such as Keche, Stay J and Dr Cryme. There was an exhibition of some amazing artworks and a funky fashion show with young designers such as Nana Asihene and Bubu.

In a bid to arm young 'creatives' with the opportunity to gain invaluable knowledge from those who have made it in the creative fields of broadcasting, journalism, acting and advertising, the British Council also added an expert discussion panel to the WAPI festival.

Although WAPI, 'I Rep Africa' was billed to be the last in the Words and Pictures series, unconfirmed reports suggest that the British Council might continue the series in Ghana.