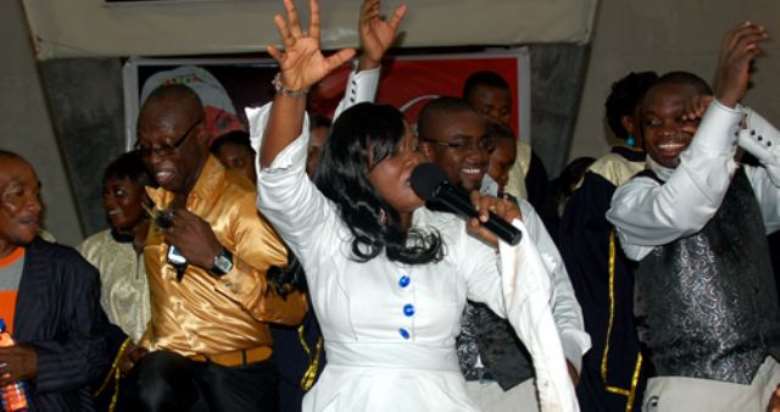 Award-winning gospel artiste, Ohemaa Mercy will leave the shores of Ghana to Europe, by the close of the week for a musical tour. Her flight which was scheduled to be due Wednesday April 21st has been cancelled due to bad weather conditions.

The tour covers major European Countries and cities, and is estimated to span through a period of about five months. However, she returns in October to release a new single. She is also expected to perform with Sonnie Badu in November.

As part of her tour, she will be performing at The Night of Praise and Worship, which is being hosted by the Pentecost Revival and Ohemaa Mercy Ministries and Foundation on the 29th of May, 2010 in Amsterdam Zuidoost, Holland.

The award winning gospel artiste, Ohemaa Mercy, is also rumoured to hit the studios any time soon, to work on a single with Ghanaian international award-winning gospel sensation Sonnie Badu, and another with an unnamed Jamaican artiste based in the United States. This is likely to propel her image on the international scene.

Hottest Photo Reports
Catch up with all the political quotes from our politicians.
Advertise here
More Gospel News
ModernGhana Links
Bethel Revival Choir gears up for Akpe Experience 2021
Voice of Pentecost to hold 'Let the nations hear' concert
Philipa Baafi Drops Another Mighty Song “Privilege”
Any challenger? Joseph Matthew makes history with 'The Name' music video
I don't have a pen and a book to write my songs - Obaapa Christy
Fredima names Joseph Matthew as new 'king' of afro gospel music
Gospel act MiQ B resurfaces with 'All The Glory' hit song
Our ministry was revealed to us through a prophet – Tagoe Sisters
Tagoe Sisters disclose how they learnt how to sing
TOP STORIES