GMA Fallout - Cheaters They are - Ruf-N-Smooth 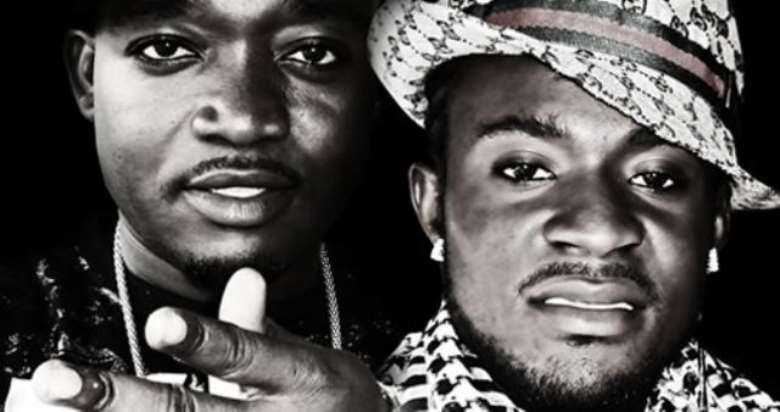 All was clear that the guys Akhan and Bullet who make up the musical duo Ruff and Smooth were not happy guys at all. Had it not been the three 'Oboshis' who saved their night, it would have been a total flop even though they were highly expected on the bill to appeal to fans.

They did their best on the stage but it was below average since their ego was affected by the fact that they lost the only nomination they appeared in to 4x4. So after the event, Stephen Nakujah of Flex newspaper went close to the duo for a chat and they meted out their anger in a wild and furious fashion.

They were obviously not happy because they said their song was more popular and had an appeal than that of 4x4 who took that award on the night. In their anger, they spat this venom to Charter house. 'It is just one Nigerian man who organized the whole show. He decides who should pick which award.

When he speaks and puts down money, then the people follow him all around. So Ruff and Smooth say that this awards is s**t. They are cheater house and not charter house. Its about time the government steps in' the shorter one said.

It was after this scenario that an unidentified man came warning the Flex reporter that he should not report anything on that interview he had had with the artistes on the basis that it was not official. That dude, who was also not happy, judging from his approach to the reporter warned that, ' I don`t want this recording to go any where else it will be bad. You have to delete that recording on the recorder and call us formally tomorrow if you want an interview with the artistes' he boasted.

What the editorial board of Flex newspaper want to know is whether it was a threat or a caution to the reporter who was doing his legitimate job on the night. They posed for his shots, that one that dude did not want him to inform them officially for those shots.

They performed on the stage and he did not inform the paparazis to inform him formally for those shots. Our message to this gentle man is simple 'Jack, don't mix emotions with work else you can never perform as a professional okay'. Better luck next time Ruff and Smooth. Still, you guys have swag, Award or no award.

Latest Photo Reports
Catch up with all the political quotes from our politicians.
Advertise here
More Hiplife News
ModernGhana Links
Money can do everything — Kweku Flick on why he can’t stop singing about money
TiC drops super artwork for new song featuring Kuami Eugene and Okyeame Kwame
SIL: Buju Delivers An Exhilarating Intro
'Many Ghanaian Artistes Don`t Want To Pay For A Better Sound Quality' - DDT
We've Taking Over and Don't Need Anyone's Validation - Phrimpong speaks about Kumerica
Speeding to the world: Agona Swedru Boys Give New Hope to Drill on The New Chapter Project
‘I'll be the first to bring Grammy award to Ghana’ — AY Poyoo
D-Black’s ‘Loyalty’ to the game unmatched as Loyalty album drops
I'm the father of Hiplife — Rockstone speaks up
TOP STORIES