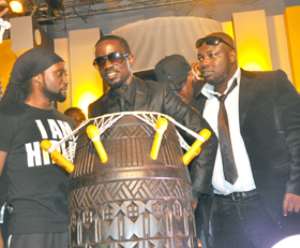 GHANA'S FASTEST rapper, Sarkodie, made history when he took home five awards including the Artiste of the Year Award on Saturday night, at the 11th Ghana Music Awards held at the Accra International Conference Centre.

The event, which attracted a large number of personalities and music fans from all walks of life, kicked off with a brilliant performance from Abrantie Amakye Dede which shook the foundations of the conference centre.

Mr. Amakye Dede was at his best. He obviously hasn't lost his touch as he was able to get music lovers moving and grooving to his songs.

His great vocal versatility, dynamic movements and general stage charisma got the audience applauding nonstop during his ten minutes performance.

4X4, Wutah and Obrafour also got the crowd wild with excitement when they individualy treated fans to unforgettable performances.

The sensational Becca, as usual delighted fans with her music. She swept everybody off their feet with her soul-touching, songs, one of which was 'Daa Ke Daa'.

Members of Vision In Progress (VIP), charged unto the stage with blistering intensity immediately they were called.

The whole place erupted into a mass of young and old dancing and singing along to their music, especially when they performed their latest hit-song, I Think I like Am. They couldn't help but show their excitement by screaming their voices out.

Ruff N Smooth, who have recently carved a niche for themselves in the music industry with hit songs like Swagger and Sex Machine, were the toast of the show as the duo got the audience 'swaggering' to their songs.

The dazzling event which was hosted by Chris Attoh and Doreen Andoh of Joy FM, saw appearances by musicians, radio, sports, film and television personalities.