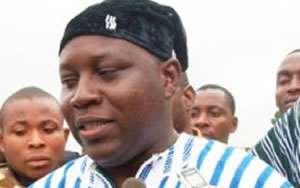 If Ghana can have the vision of the Chief Executive Officer of Tarch House, Naa Mohammed Hafiz Chogu, then the development which the Northern Region is striving for will be the cheapest commodity in the region.

Hafiz, as he is popularly called is ready to use his outfit to promote peace and development through arts and entertainment in the three Northern regions of Ghana. It is out of this dream and vision and his efforts so far that has won him the title 'DAMA NAA 1st' which means 'Agrohene' in our local parlance.

The name was given to him by the chief of Tamale Naa Dawuni Dakpema who happens to be his father. In an interview with him at his Labone office, he recounted to Flex newspaper that the vision became strong when he returned from Britain in the year 2006. He hinted that the situation in the North at the time was not the best so he decided to quit his army profession in Britain to stay there to salvage the situation. 'I believe in the many talents in the Northern region.

The list includes Abu Sadiq, Abada, Sherif Ghale, George Cliff and many more of them. I don`t know why all these people have been avoided in the Ghana Music Awards in the country. Because I wanted the peace in the region to be immediate, I established a security company in town known as Hafred Security service which was to maintain peace and order in the region' he said.

At the moment, Hafiz can boast of one event which has stood the test of time known as the Beacon of Peace concert. The concert seeks to bring together all the popular musicians in the North on one stage. One particular musician he has been using to promote this agenda is Sherifa Gunu whose song 'Suhudoo' is being played on many radio stations in the country.

'Some of the problems that is facing the Northern Region are poverty, lack of employment, drug abuse and teenage pregnancy. Meanwhile instead of politicians using their platforms to unite the people, they are rather fueling conflicts by giving some frustrated people money to create confusion to achieve their selfish interest. Hafiz will be launching what he has termed the Young Beginners in April 10th in Tamale to instill the habit of tolerance among the young people in the regions.

'Because of the neglect of Northern Region musicians, I will be using my outfit to introduce the Northern Music Awards (N.M.A) which will seek to promote music made in the North. That will come off on the 5th of November this year and I believe it will bring peace among the people in the North' Hafiz told Flex exclusively.

He therefore appealed to the government to support some of the initiative they will be taking to make things work in the region. He was grateful to his father Naa Dawuni Dakpema for his support and advise and also to all his elders for their guidance. 'One finger cannot pick a stone' was the message he left for the young ones.