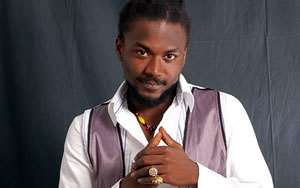 Castro De Destoyer tied the knot few weeks ago secretly in Swedru, making him the first Ghanaian Celeb to marry this year. It seems 2010 is all about love and marriage for our Ghanaian Celebrities.

Ghanacelebrities can confirm that the thrilling Ghanaian musician 'Batman Samini' who recently relocated to London with the prime motive of studies engaged his long term girlfriend and the mother of his 6 months old baby 'Mercy Geker' last weekend.

Even though, the engagement was not held secretly, the press was deliberately ignored so as to keep news of the event under tone. All the same, we have it and Ghanacelebrities wishes Batman Samini all the best as we keep our ears widely opened to catch up on the actual 'big' wedding day.

Did I hear someone say Samini has left another girl in Ghana and just got married to Mercy? Until this is confirmed, we will leave it as a passing by gossip. When we get hold of any of the engagement photos, we will publish them for the 'viewing pleasure' of our readers.