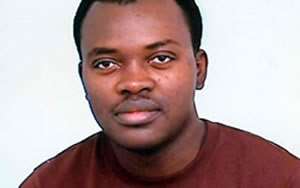 The hitherto blissful secret love affair between two TV presenters, Yvonne Nelson and Jon Germain has hit the rocks, as the flame of love between them, according to the Newsone newspaper sources, is no longer burning.

Ironically, this is happening at a time the media has started developing interest in their relationship and giving it attention, barely a month after the relationship hit the spotlight. Newsone can authoritatively say that the lovebirds are no longer singing the same song. Initially, Jon said he didn't want to talk about the issue any more.

However, when he finally agreed to talk, he said from where he was standing, he could not tell whether they were still dating. 'It is over', he sighed, but said it was through no fault of his, blaming it on Yvonne. 'When we were in this relationship, I saw things but I didn't mind because I love her.

I haven't spoken to her in a week and I don't feel like calling her and I know she does not also feel like calling me either. I am sure it is over. I don't know, my friends said in relationship, it happens that you can break up for one week and comeback. But in our case, I don't know. As she was able to tell you that we are just friends, I don't think she is really serious about me,' Jon said. For him, if Yvonne loved him, she would neither deny him in public nor even go ahead to claim that he is getting married, so I don't understand why she said that', he concluded, adding that he is not dating anybody now.

It is as though the two just want to end it all to prevent any rave reviews in the media. But close sources say there is more to it than meets the eye. The tall stars may have separately found new rhythms to their heat beats that do not seem to rhyme, with each other. Simply put, they have found new partners. They have not only reduced the tempo of the love chess game, it also appears each of them wants to flex a little, hence the breakdown of communication or the past couple of weeks, a situation one could easily describe as a personality clash.

While John wanted Yvonne to be submissive to him at ll cost, Yvonne on the other hand wanted her man to be the one doing all the calling, caring and expressing love. However, sources say Jon is feeling the heat as he still loves Yvonne.

In the past weeks, lots of fans have been calling Newsone officers to find out the true state of affairs as regards the Yvonne Jon affair. The paper had then reported that the Princess Tyra actress denied any intimacy with Jon Germain. 'I have a boyfriend and it will not be fair to go behind him. Jon is just a friend. You can call him and ask him. There is nothing going on between us. I even hear he is getting married.' She told the paper, but Jon let the cat out of the bag.