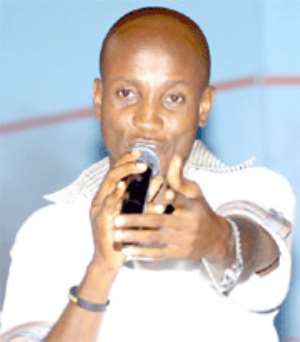 
William Ramzy Amui aka Ramzy, first runner-up in the first edition of music reality show, Stars of the Future was last Monday sentenced to a 10-year imprisonment with hard labour by the Tema High court presided over by Justice Peter Offei.

Ramzy and eight others pleaded guilty to charges of conspiracy, armed robbery and dishonesty receiving under Article 29, Clause 146 of the criminal code. Ramzy, who sported a black suit and a neck tie, was probably confident of going back to the comfort of his home.

He, however, stripped himself of the jacket and neck tie which he handed over to his mother apparently to ease the intense heat he felt when the presiding judge began reading the sentence.

His counsel, Capt Nkrabea Effah-Darteh, was not in court at the time of the sentence. Prosecuting the case, State Attorney, Ms Hilda Worwonyo told the court that the complainant in the case, Mrs Cynthia Koda, a Tema based businesswoman on January 23, 2007 reported an armed robbery attack to the Tema Regional Police.

According to Ms Worwonyo, Mrs Koda said her 4x4 Toyota Hylander with registration number GT 6409X and an amount of GH¢300 were taken from her at gun point at her community 11 shop the previous evening.

Ms Worwonyo said Ramzy who is the 8th accused in the case on the same day in the company of his friends, Francis Amuzu and Jerry Boampong, approached a businessman at Abeka Lapaz, a suburb of Accra apparently to sell the vehicle.

Ramzy and his group are also alleged to have robbed another businessman of his Grand Cherokee 4x4 vehicle with registration number GT 1791 V in 2006 at Community 9, also suburb of Tema for which another case is currently pending before court.

He is due to re-appear before the court at the later date for the commencement of the second case. Ramzy, a budding musician placed a close second at the maiden edition of Stars of the Future, a music reality show organised by Charter House in 2006. He also auditioned for the M-net West Africa Idol contest in 2007 in Nigeria.

He returned to Ghana after he qualified to take part in the singing competition but his dreams of being an idol were dashed when he was arrested in February 2007 along with eight others, just days before he was scheduled to back to Nigeria.