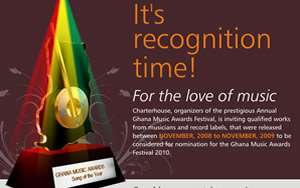 The Ghanaian entertainment industry will be buzzing with excitement once again as Charterhouse, event organisers of the annual Ghana Music Awards Festival, begins working with stakeholders in the industry towards instituting the 2010 edition.

Stakeholders are thus encouraged to send in entries of songs and albums that were released during the year under review; that is 30 November 2008 to 30 November 2009, to be considered for awards.

Officials will also be collecting entries from vantage points, including recording studios, music hot spots and selected radio stations across the country.

The Ghana Music Awards Festival, which is by far the biggest measure of the success of music industry professionals, has over the eleven years of its inception grown into the most anticipated event on the entertainment calendar.

The schedule leading to the Awards scheme began with a series of meetings which started with the sitting of the GMA Academy, also known as the GMA Planning Committee, made up of a cross-section of industry players.

On this Academy are ace musicians, producers, topnotch Arts and Entertainments journalists as well as representatives of the players of the music industry which is the Musicians Union of Ghana (MUSIGA) and Ghana Phonographic Industry (GAPI).

This committee deliberated on the calendar of activities for the year and took another look at the categories and their definitions.

They decidedly made minor adjustments to some of the categories presented at last year's event.

These included the removal of the Artistes of the Decade Category from the list as it had served the purpose for which it was instituted last year.

Members made the decision on the heels of the fact that highlife will always be highlife and the word contemporary created ambiguities that can be avoided.

This also meant the removal of the Contemporary Highlife Song of the Year from the list.

This leaves the categories for this year's award at 14 Public Categories and 10 Industry Categories.

Hottest Photo Reports
Catch up with all the political quotes from our politicians.
Advertise here
More Industry News
ModernGhana Links
Three decades of 24th Night: Kojo Antwi returns with 'The Lovers Celebration'
Wildaland: Davido, Stonebwoy, R2Bees and over 20 top acts set to headline Africa’s “Glastonbury”
Yvonne Nelson wins GH¢500,000 defamation case against Mona Gucci
Ghana is seriously sick, the system are annoying and our leaders are stealing us – Kumchacha
Kweku Darlington claims he's rich enough to buy anything he wants now after Tim Westwood
P-Square must thrash out their past or risk splitting again – says Niibi Klala
20year-old video vixen, Whitney reveals how she got her $20,000
Kumasi theatre will be completed by end of next year – Okraku-Mantey
Nigerian star Joeboy, Reveals The Secrets behind hit song Alcohol, rise of Afrobeats and culture
TOP STORIES