Nigerians set Ghana on 'fire' at Night of 1009 Laughs 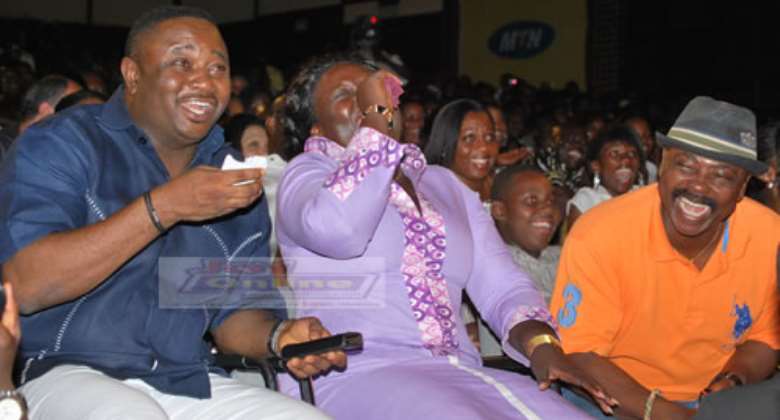 Deputy Local Government Minister, Elvis Afriyie Ankrah, his wife and others having a good laugh.

What do you do when an alcoholic who now claims to have taken up the Cross of Christ and is now a pastor starts quoting alcohol brands as titles of books from the Bible?

Or you visit the poultry farm to buy one fowl for the Yuletide but the very particular bird you find irresistible forewarns you that it is beyond your pocket, and then when the farm owner surprises you with an extremely high price, the bird squawks to reaffirm its warning: 'I told you so, didn't I?'

Or better still, what do you do to a child who goes reporting the dad to the mum that a lady answered daddy phone and therefore he must be up to something fishy, only for the lady's voice at the other end to be a pre-recorded MTN service voice telling you that the number you dialed is switched off?

Of course you laugh out loud, especially when everyone else by your side at the filled-beyond-capacity Accra International Conference Centre is cracking the ribs and cannot hold back the outpouring. It is exactly what happened on Saturday night (Boxing Day) when Charterhouse hosted the MTN-sponsored Night of 1009 Laughs and Music featuring top gun Nigerian stand-up comedians and Ghana's own Ka Ninja.

Take Okey Bakassi's explanations of why women are smarter and stronger than men – while man was made from dust, the woman from bone; and while man (Adam) was the first to be created, he was so 'dumb' and timid he refused to reason that if there was a tree of knowledge in the Garden of Eden, he should rush to eat of it, instead, it took a smart Eve to taste it first before she ushered him in. (Only God knows for how long Eve enjoyed and kept the fruit secret before letting Adam in on it.) Plus the language of women at various stages of a man-woman relationship; - at the outset, the woman visits the man in his home and exclaims; 'I like your house,' 'I like your car' and 'I like your bed' etc, then soon after marriage the language moves into 'We have to change our bed because I don't know how many women have slept on it before me,' and then when the marriage has seen some years, it becomes 'don't you think my mother-in-law needs to give me notice before visiting my home?”

Deputy Local Government Minister, Elvis Afriyie Ankrah and his wife, MTN's Chief Marketing Officer, George Andah, Kwame Sefa Kayi and Said Sinare and his family, seated among the front row, visited their cheeks repeatedly with their handkerchiefs as they shed tears of joy all night.

And the comedians themselves were from time to time patients of their own assault, as depending on who was on stage, the rest had endless good laugh at a colleague's jokes.

And there was also a good blend of danceable music from MTN Icon Samini; the ever fresh group 4X4; Efya (Jane of Irene and Jane fame) and Stars of the Future 2009 winner, Bertha. Indeed so refreshing was the fun that even when the programme terminated at about 1:00am Sunday, it maintained a full house to the end.