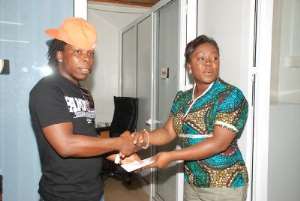 Hip life musician, Ayigbe Edem on Friday donated cash to a four-month old baby suffering from Hydrocephalus, and some items to the maternity ward of the Hohoe General Hospital.

He donated GH¢1,000 to Michelle Koranteng, the four-year baby, through TV3.

The baby needed GH¢2,500 for an operation to correct that medical condition. A group had earlier donated an initial amount of GH¢1,500 to the baby.

The donation was received by Beisiwa Duwuona Hammond, a news anchor at TV3 who was very thankful for his kind gesture.


Later in the day, he donated items worth GH¢500 to the maternity ward of the Hohoe General Hospital, Volta region. The items included bags of rice, toiletries, cerelacs and many others.

Ayigbe Edem in an interview with Myjoyonline.com said his initial priority was the donation at Hohoe General Hospital but a friend informed him of the baby's plight through a text message.

He was touched by the baby's congenital brain condition, when he later personally saw it on TV3 News, because it was a matter of life and death.

Earlier this year, Edem did similar donations at the Weija Leprosarium and the Maamobi Polyclinic.

In a related development, Edem Ayigbe is set to launch his Volta Regime Foundation, a charity organisation, early next year to continue helping the needy in society.