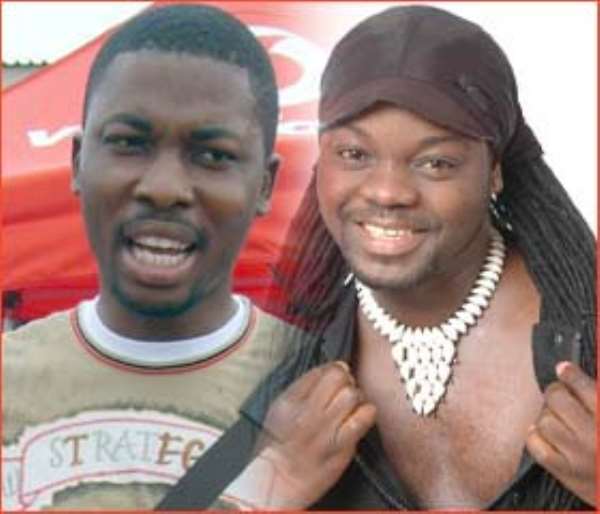 KWAME ASARE Obeng, a hip life artiste also known as A-Plus, has condemned Sidney for deceiving the public into thinking his latest hit-song 'Enkoyie' is not a political song.

A-Plus told BEATWAVES; “The 'Enkoyie' song, which I was featured in, is purely a political song. Sidney is afraid to come out boldly to tell Ghanaians that the song is political”.

Last week A-Plus descended heavily on Sidney at the Adom FM studios when he accused him (Sidney) of deceiving the public about the true meaning of 'Enkoyie'; a social song which talks about issues affecting the lives of the people in the country.

He added, “Since we did everything together in the studio, why is he saying that the song is not political”.

Sidney's 'Enkoyie' talks about the economic hardships the president's apparent slowness in providing solutions is causing and the general feeling of disappointment by many of those who voted for the him and his party.

Though the song makes no mention of a political party or person, it is clear who the song is referring to as it compares the current feeling among Ghanaians to that of a man who leaves his wife to enter into a new marriage.

One which he has sooner than later regrets, but feels trapped by circumstances and cannot get out of for some years to come.

A-Plus went on to say; “If Sidney has an agenda that is fine and as a colleague I will not fight him for that. Before I was called on board I was made to believe that the song is purely political”.

But in a chat with Barima Sidney, Ghana's most controversial rap artiste whose hit-song Africa Money made a lot of impact in the African music industry, he explained that his current hit-song 'Enkoyie' has nothing to do with politics in Ghana. And although people see it is as a political song, he does not see it as such.

Sidney, who insisted that his song is not a political song, told BEATWAVES that Ghanaians always misinterpret the content of his songs by making them political.

According to him, the idea behind 'Enkoyie' is different from public perception. He advised that people refrain from politicizing the meaning of his songs.

A-Plus released an album 'Freedom of Speech I' right before the 2000 elections in Ghana.

The hit track 'Mesuro Mpo Na Merekeka Yi O' talked about how he was afraid of what he was saying and doing, but he would say it anyway in light of democracy, as he lambasted politicians.

In one of the political songs he used Dr. Ephraim Amu's 'Yen Ara Asase Ni' chorus.

A-Plus' style in 2000 was new and a welcome addition to the hip life landscape. Apart from his political songs, he also has a lot of socially conscious songs, pitting him against the likes of Sidney, Obrafour, etc.

After J.A. Kufuor took over the mantle of power from J.J. Rawlings in 2001, he released 'Freedom of Speech II' which criticized the wrongdoings of the NPP government and implored them to do better lest they got voted out of power in the next election (2004).

The New Patriotic Party won another term in office, but it did not prevent A-Plus from releasing 'Agye Gon' - analyzing the 2004 campaign promises, etc.

Sidney went solo in 2001 with maiden album 'Tinana', which did very well, but his sophomore album 'Akofna' in 2003 was even better. It featured Abuskeleke, which was extremely controversial.

The title track of his 2004 album 'Scent No' was also controversial as it detested dirtiness and teased various professions.

The song was picked as a campaign song by the NPP after tangling with the NDC over its rights in the run-up to Ghana's 2004 election. 'Scent No' was the NPP candidate's slogan.

Sidney doubled up the controversy in his 2005 album 'Obia Nye Obia' which struck a timeless debate over equality in society; while 'Wo kunu kotebea' encouraged citizens to support their leaders and partners to do same for each other, but the chorus had a profane twist.