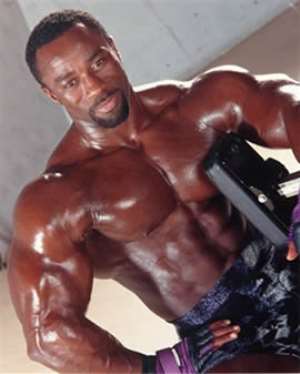 
IFBB Pro and Canadian Bodybuilding Legend Freddy Antwi returns home to support his fellow bodybuilders. A legend in his own right and revered for not only his physique but his big heart, Freddy has long had the desire to make a contribution in his homeland Ghana to inspire other athletes.

At this year's Man Ghana Competition to be held in Accra on October 24, 2009, Freddy will be attending to assist with the judging of the show and will also be a formidable sponsor offering a cash prize of $1,000 Canadian dollars to the overall winner. Furthermore, he will also be awarding gifts to the winner of each weight class and a special trophy to honour the best poser, something close to his heart having won the best poser award himself in each and every competition that he entered!

Freddy Antwi understands the Fitness Industry from many perspectives. His grass roots experience started in the sport of bodybuilding in 1989 and took him on a journey to becoming a phenomenal athlete of such magnitude that his name, Freaky Freddy, is legendary.

Freddy began his athletic career as a high school football player. He took to weight training in 1987 to help regain strength and endurance after sustaining a knee injury. In addition to the great results he was getting, he stumbled upon a passion for weight training. His unwavering tenacity, creativity and desire for perfection coupled with his unbelievable symmetry and genetics made him the only amateur bodybuilder sought after to perform on stage and make guest appearances. As an amateur athlete, his charisma and creativity won over crowds worldwide as he was commissioned to perform his show-stopping performances while his legend grew. Freddy competed as an amateur in bodybuilding from 1989-1999.

He was the only competitor known to have won first placing in each and every competition and also swept the overall titles and the best poser award in each and every contest. Known throughout the industry to be a humble and modest man, his early found fame did not interfere with his quest to attain professional status.

After capturing the title of MR.CANADA, Freddy retired from professional bodybuilding and began using his vast experiences and determination to focus on his other passion, business. Today, Fred is a professional trainer of elite athletes and continues to train and educates individuals across North America, inspiring others to attain their own personal fitness goals.


Freddy Antwi will give a cash prize of $1,000 Canadian dollars to the overall winner.

"It's a great time to invest in Ghana, the safest country in...
38 minutes ago