We own Yori Yori not Bishop — Bracket 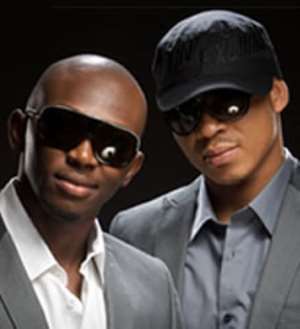 The love of music brought the duo of Bracket together at the niversity of Nigeria, Nsuka. Nwachukwu Ozioko aka Vast and Alli Obumneme aka Smash have been great friends and their song Yori Yori keeps making the waves but lately the duo are embroiled in a controversy about who owns Yori Yori. Amobi Clems aka Bishop claims he wrote the song but the duo disagree and throw more light on the issue and insist the song belongs to them.Excerpts:

What informed the name Bracket?
The name came from K barrister who was actually meant to sponsor us but it didn't work out because then we had a very big crew and we never knew that it was just going to be the two of us. We had about ten of us in the group then so we just called it South Bracket. K barrister now said we should remove the “south” and we were left with Bracket.

How long have you been together?
Well, we have been together since 1999 although we had many people in the group then and we never knew what we wanted. We wanted to make it like G Unit, a foreign group. We wanted to be like Tupac and co. All we wanted then was to imitate them but we found out that this was not what Nigerians wanted because if you are African you have to play African music.

How did you guys meet?
We met through school shows, because we grew up in the same neighborhood at Nsuka very close to UNN. That was how we met.

Is Yori Yori your song?
Yes it is our song
But Bishop has been saying the song is his …
If it is his song, let him come and sing it and let us listen to his voice. You know we all have freedom of expression. You can say whatever you like. If he says he owns the song he should prove it. Although he was once a member of the group, but Yori Yori is not his song. The only thing he had in the song was the “rap” but when he had problem with the company it was removed.

Initially you guys said he left because of his studies …. so why didn't you just say he left the group?

We didn't say that , because he was our brother and we didn't want anything that would dent his image. You see, even when he was not in the group we used to talk to him but recently maybe somebody advised him otherwise…. to blackmail us … he just changed and he started saying that you guys said I went back to school but you drove me away from the group. So our management felt it's high time we told the press our own side too. Basically the thing is between him and the management and not us.

Is he still your friend?
Yes he is, but he is the one going about painting the picture that we are enemies. You see we wanted to push this aside and move on. We wanted him to come to us and make us friends again but he went on listening to wrong advice and that is very dangerous. You know there is nothing as bad as wrong advice… it kills. He should come to us and let's talk as brothers.

What inspired Yori Yori?
It was the media . During the days of Happy day it wasn't really good but because the media was still writing about us even when we were out of the scene for three years we thought we still had some things to offer, so we decided to do something special for our fans. That was when the inspiration came but we weren't really feeling it then and the same Bishop that is now making allegations against us said we should give it Faze' beat and we told him we can not copy it.

He said we should give it to the producer to produce and God knows that we are telling the truth. Bistop never wrote a verse in the song aside the rap and it was cleaned off when he left the group. Honestly, it was him (referring to Nwanchukwu) that wrote the song .Why didn't Bishop say he wrote Adaowerri too because we wrote that when he left the group. He could have said that too but thank God he left the group before we wrote that song. Bishop doesn't write songs, so he should stop what he is saying and face his work.

What is your relationship like with P Square?
They are more like brothers to us. It's been a long time we met them. Since we did the happy day song we have been friends. We call them our brothers.

Is music a family thing?
Alli: Yes it is in my family… we love music because when my grandfather was still alive, you know he stayed alone in a very big compound. He would make drums, the local guitar and he played it all alone. Even when I was small I used to play music all alone too.

Nwachukwu: Mine started from the choir and also I had siblings who were in the choir too… so I can say it's a family thing too.

At what point did you decide to take music seriously?

It's been a long time because when you are underground as an artiste and you have not made it you have a dream that one day you will get there. But we started taking it seriously when we released Happy Day.

Was there any objection from your parents?
Well sometimes, they would support you when it's going well but when it's no longer going well, they would then say “We don't think this is really working out well, so go face your studies squarely. It wasn't regular… but they were so particular about our studies.

Was there a time you were so frustrated you wanted to pull out?

Ha… that happened a lot of times…. we had several experiences that almost made us pull out. Even before we did Yori Yori we wanted to go our separate ways. But by the grace of God we are still together…. unfortunately the third guy is no longer here and it wasn't our fault but his own doing. If he is not sincere enough to say what really happened then let it be.

Was there any event that really made you feel so bad?

I remember when we went for Star Quest 2002, it was so frustrating because we had no money and from UNN then we had to go to Enugu . We had to hustle for transport fare and what have you. Infact, we hoped we could win a prize and get money from there but we didn't win anything. We were left with nothing and dropped at the audition.

We went about borrowing money and we were insulted but some people helped us. Also, you know sometimes your parents won't give you attention because you are a musician. Sometimes we were unable to afford our school fees. So it's very frustrating. But we still thank God for the experiences we had.

What is the main challenge you are facing now in the industry?

How do you cope with female fans?
Well for that question we would say, business for business, pleasure for pleasure.

Are you into any relationships?
Nwachukwu: I don't know about him o! But as for me it is still complicated right now.

Nwachukwu: Well I wanted to be like you, a Journalist. You know I am a Mass Communication student.

How has it been combining academics with music?
We thank God…. had it been that UNN was not on strike we could have finished this session and by next year we would be through. Other schools are in session now, but we are not . So it's affecting us really bad.

Are you sure music has not affected your studies?
Of course it has because we are not always in class but we try to balance things and make sure we read and go for our exams. We make sure we go to class as frequently as we can.

Ashanti Region Has Most Completed SHS Projects — Napo
44 minutes ago