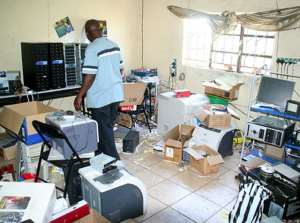 THE Association of Yoruba Marketers (Distributors) is reportedly engaged in a fierce survival battle against the pirates' latest ingenuity of 8-in-1 DVDs of movies. For those who may not know, the 8-in-1 DVDs combine 8 different movies in a single DVD. On the streets of Lagos, such copies go for less than N250, which is the normal price of a genuine copy of each movie. Although one had repeatedly counseled the distributors to the point of being regarded as a busybody stuck on the same point like a broken record, but the issue involved touches on the soul of the industry; therefore one must overcome one personal feeling and fears of abuses to again offer this largely unsolicited solution.

Ordinarily the distributors deserve sympathy, irrespective of unprofessional ways they function, they at least supply the minimum financial energy that currently keeps the industry going! However, with all the facts on the ground - objectively considered - it is difficult not to reach the fair conclusion that the marketers are largely the architects of their headache. It is also hoped, that if only for this onslaught of the pirates they would need no further incentive to reappraise their position on the haphazard way they have been implementing the new distribution framework. Simply put, if they faithfully keep to the tenets of the framework, not only would their fortunes (and by implications, the industry) be significantly improved, the totality of the new distribution provisions adequately protect them against almost all forms of infringements; the 8-in-1 included. Here are some tips on how to go about it: All over the world, movies (because of its peculiarity) are distributed on territorial basis. The logical and practical concept is that once the (higher) releasing Distributor sells the distribution rights for a geographical space (territory) to a retailer, it is that retailer of the sold space (territory) that will take all the necessary steps to prevent piracy in that place, if for no other reason than to protect the investments made buying the distribution rights of the movie for that geographical space. This in a summary is what the new distribution framework tasks the distributors to do. Unfortunately, we are in an environment where people want the law to exempt their infractions without wanting to concede an inch to their transgressors. The complaining distributors do not want to distribute on territorial basis as demanded by the new framework, partly out of ignorance, but largely because doing so will make them to be held accountable for the actual proceeds of the movies to the producers. It is therefore the typical Nigerian way of not wanting to assume responsibility but nonetheless not letting go of the accruing benefits.

Movie piracy thrives here in Nigeria because of the indiscriminate method adopted by the distributors to sell their movies to just about anyone willing to buy, despite the provisions of the new distribution which expressly instructs the releasing national/regional distributors to sell only to retailers either licensed directly by the Board, or those that are accredited agents of licensed national/regional distributors. Right now, all it takes for a pirate is to get a copy of a movie, and piracy instantly commences, but if the distributors comply with the distribution regulation to sell as prescribed to only known and legal retailers in different territories and with each copy of their movies in circulation carrying the official classification tag of the National Film and Video Censors Board (NFVCB), piracy would be easier to trace and dealt with. Those engaging in piracy now do so knowing that the chances of identifying them is nil, because the copies being pirated cannot be traced back to them! When the issue of some unscrupulous police hiring their official guns to armed robbers became the rule rather than exception, police authorities began the practical solution of painting the guns in official police colours. It has not totally eliminated the scourge, but has made identification of the culprits easier. What is the distributors' excuse for not complying fully with the provisions of the framework?

Grouping the retailers into territories is easier for the distributors to do and offer more benefits without any known negative side effects. First, it does not stop all the retailers in an area (territory) to sell the same movie. Rather, it simply put one of them forward as the person to hold responsible for the retailing of the movie within a particular area. All the copies now sold individually to different retailers in an area are simply to be sold to just one retailer, who then re-distribute to the others in that same area.

In the event of piracy, the releasing national/regional distributor will know who to hold responsible, since under the new framework, there could be only one official retailer of a movie in an area. Why is this so difficult for the distributors to do? It does not reduce their sales in anyway and having so many territories to sell to could only multiply the sale volume, so why again are they not doing it?

Dealing with the menace of 8-in-1 pirated movies is the easiest thing to deal with under the framework, because if the releasing distributors sell to retailers on territorial basis, and all the copies in circulation carry official classification tag, the source of leakages would be easily identified and the retailer/s feeding the pirates with their copies could be isolated and promptly dealt with.

As for the members of the public buying the pirated copies on the streets, the new distribution framework protects the retailers in whose territory such pirated copies are watched. First, the retailers cannot force people within his/her territory to buy their movies, but the position of the law is that as the sole distributor of a movie in a particular area, anyone watching that movie within that area must either source the movie from the (accredited) retailer or if found with a copy of that same movie (genuine or pirated) must be ready to explain how they come about the movie, otherwise the retailer can bring copyright infringement against that person in whose possession a pirated copy of the movie he (the retailer) has invested in for the enjoyment of the people within that area. The distribution framework provides that by whatever means people watch a movie in an area of legitimate distribution, the accredited retailer of the movie in that area has the rights to demand for payment from those watching the movie, except it is a personal indoor event, but in that case, it must be a genuine copy bought either from that accredited retailer of the territory or from other retailers within the same authorised network of distribution. This is as obtains in all other organised societies. Therefore once the distributors comply by retailing on territorial basis, the present free-loading of movie by barber shops, pepper-soup joints and the likes will cease! Movies like other intellectual property do not sell on absolute basis like other household goods. The ownership of the author (copyrights owners) is perpetual. The buyers only have the limited rights of enjoying, not to trade with the material beyond what the copyrights owners allow. If a genuine copy of a movie is bought from outside a territory, there is a way, called cross-territory sales commission through which the retailer in whose territory the movie is being watched can be compensated by the releasing (higher) distributors, or the retailers selling into that (watching) territory. Remember please that all the retailers of a movie belong to the same chain or network of distribution and a movie can only be released for national or regional distribution by one distributor, therefore cross-territory sales is bound to happen but will be an internal issue for the single network of retailers to resolve among themselves.

The crude methods of carrying out occasional raids are unlikely to produce the desired results. The distributors have all the opportunities they need to protect their investments by looking closely at the provisions of the framework. The solution they seek is in their hands - if they will listen!

India's sinking hill town, a casualty of the warming Himalay...
41 minutes ago