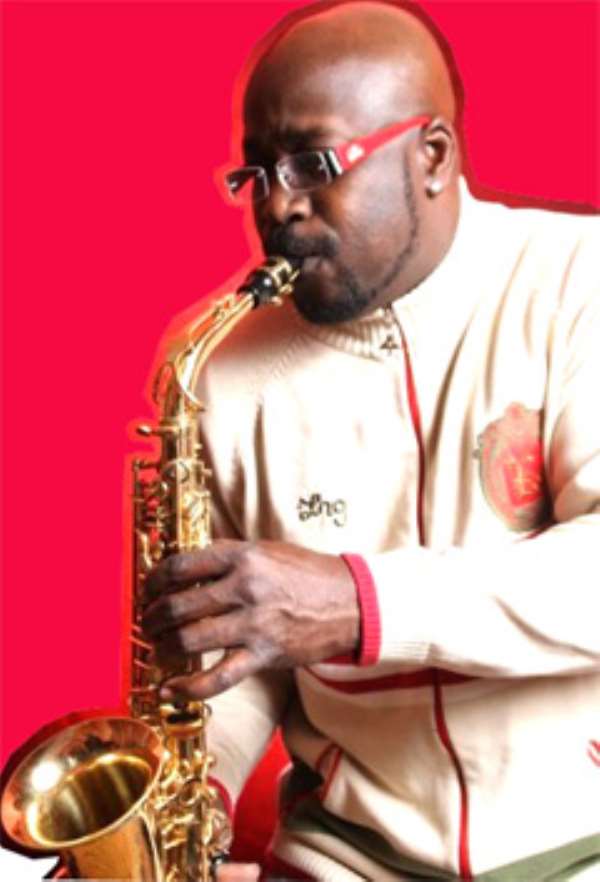 Kola Ogunkoya, a Nigerian musician who nationalised in the United States of American came to limelight through playing Afro music.

He was influenced by late Afrobeat Legend Fela Anikulakpo Kuti but unfortunately, he is the only Afrobeat artiste who never played for late Anikulapo Kuti when he was alive.

Describing his music as a combination of Afro juju, high life and jazz with the smooth fusion of African percussion. Besides his music he is very angry with the way politicians are running Nigeria Kola shared his views with Ebun Babalola on Afrobeat music as well as his decision to stay back in United States of America. Excerpt.

Why did you decide to stay in America?

Because Nigeria is not a place to be.

What do you mean?

A lot of things are wrong in Nigeria.

Health care, education, no light, bad roads etc, and quite deplorable there is no place for the Nigerian child.

There are people like you who also chose to stay in Nigeria to salvage the situation?

They are doing that on their own risk. These people are there everyday, struggling to
make ends meet, and each time you see them, there are virtually no changes one can see.

That means you can't join others to make your own contribution?

Whoever does that, is just doing so at his or her own risk .

People do all sorts of miserable jobs to survive in America ;why not in Nigeria?

You can't compare America with Nigeria. In America there are opportunities for citizens and non citizens,but not so in Nigeria. People are living miserably in Nigeria.

Don't even go there at all because, injustice is another problem that Nigerians are battling with. Nigeria is the only country where people are killed and nothing will happen.

But people got killed in America too?

Anyone who plans to kill in America would have considered the implication before doing that. And in America, nobody kills and go away with it like what happens in Nigeria.

Killing has become part of life in Nigeria and injustice is the order of the day.

So, what is your impression about Nigerian Democracy so far ?

There is nothing like democracy in Nigeria. Nigerians don't know what democracy is all about, it's mere lip service.

Won't you come back to Nigeria?

For the love and vacation ,yes. But for settling down maybe when democracy is really working.

I don't know what part of the country you are staying or maybe you are not even in this same Nigeria you're asking me about ,but I'm sure you know that Nigeria is not a place to stay.

I remember the last time I came to Nigeria, nine years ago… believing I was going to make a difference with dollars, but I was disappointed.

America gave me this money, meaning that I worked hard to play music all over every week.

I went to USA in1996, and made my money doing the right thing, playing music and I brought the American money to Nigeria with the hope of contributing my quota but the rest became history.

How much are we talking about here?

Close to 100,000 U.S dollars to the extent that I had to borrow money. Then, I opened a cultural club for Art and Music which was named Gbedu” the music village in Opebi, Allen, Lagos . Everything was moving on fine as planned. I did not know I was doing the wrong thing. I had spent all my money putting the place together.

The man who leased the place to me collected huge amount of money from me before he could lease it out. What he claimed was that, he loved me and that because he knew me, he was going to help me.

I paid for the venue, renovated, and embarked on the promotion of the business with a lot of money.

I performed every week with other Nigerian artistes. But, things changed when I was about reaping the fruit of my labour. When I was spending my money renovating his building he loved me but when the time to reap the work of my hands, he started drama.

I called lawyers but the surprising aspect was that Nigerian lawyers told me I should forget it if I loved my life and I decided to just leave and go.

Although I wanted justice at all cost but from where? in Nigeria? I'm sorry, no way. I tried all I could at the end of the day , I went back to USA to get more money to run things but along the line I had to readjust before I could come back to Nigeria.

I heard the news that my immediate elder brother (Kunle Ogunkoya) who was the manager of my Gbedu club was murdered in front of the club. And nothing was done by Nigerian Police to bring to book those perpetrators. And that was how I lost my brother and my business between 1996/99.

That was quite unfortunate

Yeah. As if that was not enough atrocity. There was a time I went to one of the Adewale Ayuba's show in Ikeja, GRA. I was robbed. My car, money, passport gone, just like that. And nothing was done.

But that happens every where, every time

Don't just go there.You can't compare America and Nigeria by any standard. Nothing like those things I mentioned happen here without proper investigation and also bring the offenders to book..

In America, someone who falls down in a store would be taken care of by the owner of that store and that was the simplest way of explaining it.In Nigeria where everything goes if you fall in Nigeria, you may be slapped by the owner or probably interrogated.

After my terrible experience in Nigeria I went back to America and I was accepted with love and even to crown it all I was granted citizenship.

That is the difference between America and Nigeria. So, tell me, if you were in my shoes, would you have advised me to forget the past?

America is the dream for any human being.

How would you rate democracy in Nigeria?

The situation is so poor compared to when the country got her independence. There is no democracy anywhere in Nigeria . Politicians are merely deceiving Nigerians.

Are you thinking of coming back to this country?

Maybe when sanity returns to Nigeria and when democracy is really working.

Your most embarrassing moment?

That was when I spoke and nobody understood what I was trying to say, I got frustrated but everything has become a thing of the past .

Americans are lovely people. If you speak bad English, they will not take offence. They don't laugh at you or make you feel stupid. I've mixed, worked, talked with them and have made some friends with them

Your relationship with other Nigerians…

Of course, but anytime we see or meet, the only thing we discuss is Nigeria and all the atrocities, shame and disgrace our politicians have brought to the country.

Now, we are talking of re-branding the country…

What country, are we talking about here? Is it the country that killed its Attorney-General and nothing happened. Who wants to re-brand the country?

. Please, enough of this Nigeria question, let talk about myself and my music

Wouldn't you want to establish Gbedu in Nigeria?

I've not thought of playing or establishing Gbedu in Nigeria. Maybe, when I completely get over my brother's death. I'm happy playing for the Americans and expanding my coast beyond America, but definitely not Nigeria.

Why the choice of the name, Gbedu Master?

Gbedu master is a name given to me by late Fela Anikulapo Kuti, Uncle Steve Rhodes, Ben Tomoloju, Uncle Benson Idonije at Uncle Tunde Kuboye during the 3rd year anniversary of my band, Afro Gbedu Ensemble, which has become my stage name while my business name remains Afrobeat music. That was 1989/90.

Were you by any chance influenced by Fela Kuti's music?

Yes, but unfortunately, I'm the only Afrobeat artist that never played for Fela Kuti .

How long have you been playing music?

I love Afrobeat because its our own African music inherited from our culture and I believe we should be proud of taking our culture abroad. It's music for the matured minds and the only thing closed to Jazz music where good musicians can express themselves. It's our music Originality Nigeria music not hip-pop.

How many highlife musicians have you met?

Many of them both in Nigeria and abroad from Dr. Victor Olaiya , Eddy Okonta, King Sunny Ade, Late Fela Kuti amongst others.

…And if not music?

I would have become a boxer.

How would you rate music generally?

Food of love , but rating my own music, It is just the beginning.

Your popular “Eleyinju Ege,” how did you come about it?

Eleyinju Ege was a song I composed and put together because I wanted to write a song that will last for ever , call it Evergreeen Song and I was able to do that with God's blessing and that was the same research I did on “Omo Pupa ooo from Victor Olaiya”.
Growing up

Though, no encouragement , no money , no support.

How would you describe yourself?

My profile looks rough and good , I'm a Nigeria born American citizen Afrobeat Artist who believe in the African arts and culture .