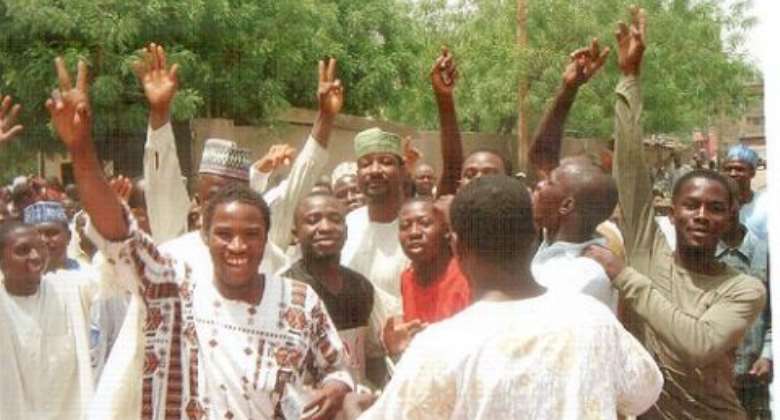 Iyan Tama after release in May with his supporters.

I carried out this interview with Sani Mu'azu, the president of the Motion Pictures Practitioner's Association of Nigeria (MOPPAN) on 22 January 2009 at Bayero University, after Iyan-Tama's second appeal was delayed because the judge suddenly had to travel.

As MOPPAN president, what are you doing about this latest crisis? I know your film Hafsah is in court and also MOPPAN has a case against the Kano state Govt., so could you give me a quick summary of what is going on.

Well, you know, we started this whole process of going to court with our case on Hafsah when it was arrested in the market, and we challenged the authority of the Kano Censors Board to do so. We have since then initiated another suit against the Kano Censors Board, as a national body, that is MOPPAN, challenging the legality of the board as well as bringing out the issues to do with conflict between the National Film and Video Censors Board and the state Censor's Board as enacted by the state assembly. It is interesting that ever since we did that, we expected the Kano State censors board to allow status quo to remain until when these issues were clearly explained by the legal authorities. But the state censor's board has gone on to arrest our members indiscriminately without any cogent reasons.

The case of Iyan-Tama is one of such cases. Iyan-Tama's case had been on and off for quite a while. It culminated into this arrest and subsequently the court sentenced him without the option of fine. It is really strange, because any person—you don't need to be a legal person to know that Iyan-Tama had all the prerequisites to do movies. His movie was appropriately censored at the national level. His movie also had the blessings of all the national associations or agencies in charge of movies in Nigeria like the Film Corporation and the National Film and Video Censors Board. Expectedly Kano should be proud of Iyan-Tama and his works. It is really strange that a person who has done these kinds of feats for the state is the one who is being tormented and thrown into prison without the option of fine.

We do know for sure that this is basically an issue that has no relevance or no direct bearing to filmmaking. Iyan-Tama is a victim of his political activities as well. He contested along with Shekarau for the governorship of Kano State, and he had been most vocal among all the contestants who challenged the transparency level of the governor. He challenged the manner of administration of the state by Shekarau. He is a very vocal person. He kept on with this agitation for quite a while. He is being persecuted today as a result of his political activities. We have it from authoritative sources that Iyan-Tama's issue has gone beyond the Kano Censor's Board. Kano Censor's Board is just being used to get through a script written from the Government House. We are however very optimistic that the state chief judge will not want to continue to jeopardize the image of the judiciary in Kano. We want to believe that when the case comes for hearing, we believe the likelihood of getting a favourable judgment is there.

As an association, we want to assure all those that have gone through the swords of the Kano Censors Board that we will never leave this issue to just go like that. We will continue on this path until somehow justice is done. Hopefully even if all we achieve is a simple letter from somebody saying what this censor's board has been doing is wrong and some kind of apology to our members, at least we are hoping that somebody somehow will be responsible for the actions of the government.

Let me just ask you, I know your film Hafsah was arrested for being sold when it wasn't censored in the state. The same thing for Tsintsiya. What was the difference between the two? Why was Iyan-Tama arrested? I know you said it was politics….

The difference is simple. Hafsah was arrested. We went to court. On Tsintsiya, Iyan-Tama was arrested and was taken to court. On our own part, we are the ones who are complaining. On Iyan-Tama's part, he is the defendant. That tilts the scales against him.

Also, as far as the register. MOPPAN has told its members not to register individually with the censorship board. Is that right?

Yes, we weren't very strict about that, though. We did say people should not register individually, but we said all companies should register because they are businesses operating within the state, and if the state has a law that says all film businesses, alongside other businesses, must register, we encourage our members to register. Now by and large when this issue kept dragging, we discovered that we don't have options for our teeming members who can't work. So those that sought for our advice to register, we encouraged them to go ahead and register, so that we wouldn't all remain unemployed. We are challenging that registration and we are hoping that the court will throw more light by saying that the Censor's board has no authority to register individual members. And once we get that interpretation, the registration will turn to nothing. But people are registering.

Is there a clear copy of the censorship laws? Is there a publication that you can look at and know for sure what is prohibited and what is not?

The Kano State censorship law? Yes, we have copies of the law.

It seems to me from what I have been hearing there have been new things being added to that?

Oh, yes, yes. It is interesting but Rabo has never been faithful to that law. Since he came, he has been manipulating the law to create his own new rules and regulations. He called them “new guidelines.” For instance, here we are with a law that says the highest amount of money you can charge somebody as a fine is N10,000, and we've heard of people paying N300,000, N500,000. So, nobody is being faithful to the law. People are just using the law to do what they want to do.

So, if he has said that there are new guidelines, have those new guidelines been clearly presented to the filmmakers or to the national associations?

Rabo is […] not a person who will say one thing and stick to that. He is always like a chameleon. He says this, and the moment you say yes or no, he will move to the next shade of colours. As a person, we have read him very well, and we feel that where there is no conflict, he will slip. He thrives on conflicts. He believes there must be conflicts all the time for him to show he is working.

Does MOPPAN have a record of how many people have been arrested or taken to court over this?

No, we have a record of so many people that have been taken. Most of the arrests and prosecutions are done clandestinely. In most cases, people in the studio, working, will just get arrested and will be asked to pay 20,000 a piece and they will just pay the money and quietly walk away. So some of these you hardly hear about. Some of the people who are arrested are children who are in a café browsing or children in a game store playing video games. These are not members of MOPPAN, but, you see, using the same law, these people were prosecuted and extorted for money. So we can't say for sure, but it is getting to an end. This is the way we see it.

Most of the cases are being tried in a mobile court, right?

Yes, all cases to do with censorship in Kano go to the mobile court attached to the board. That is the reason why, for instance, the case of Hafsah is not with the mobile court because we were able to sue them in a state high court.

Does that court keep records, do you know?
The judge is another interesting twist to the entire thing. […] All his activities have clearly indicated that he throws the issue of the week to the dustbin, and he does what ever he feels like. Even in the day of slavery, I don't think people were treated this way. […] He arrests people and sits in the night in his court with candles. And all kinds of funny things you will never see in a civilized court happen in that court. There are so many petitions against the judge. I don't know why the Kano State Government is keeping him there. I'm sure it is because they wanted a hatchet man to help them get rid of vocal people like Iyan-Tama.

If there is anything that anyone wanted to do to help this case, what would be things that would be useful….

Some of the major challenges right now are to pressurize the Kano State government to realize what they are doing. They are infringing on the rights of individuals and professionals. They are working against set ethics and standards for film practice in the world. They are throwing people into jail and thereby infringing on their rights to socialize, to exist, to be useful as productive individuals and so on and so forth. We want people to speak out to any person or any group or government that can pressurize the government to realize these issues. We want people to let the government know that this is not shari'a. This is not Islamic shari'a. We want people who can assist to assist us with the legal means because fighting legal battles in Nigeria entails getting the right people who are not just trained lawyers but who have the capacity to influence a few things in the country. We need people with that clout to bear into the matter. We also need support from people to off-set the bills of these legal people. If you have a good lawyer, they are a lot of money to start the process or sustain the process, so we do need resources to help us offset the bills of the lawyers. But it is very important that people keep talking against this injustice and this disregard to the fundamental human rights of people.

We will refund monies to Muslims we couldn’t fly to Mecca – ...
8 hours ago