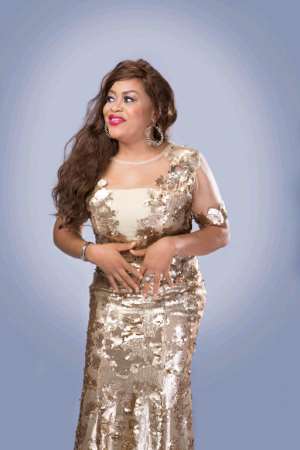 Screen goddess and former aide to Governor Rochas Okorocha of Imo State, Nkiru Sylvanus, is no doubt a pretty actress who is loved by many, even her critics. Her acting prowess is second to none and that is what many love her for.

From her famous character as Blessing a.k.a 'Ble Ble' in the soar-away Nollywood flick 'A Cry For Help' to her present role as 'Sandy' in her recently released self-produced flick, 'The Voice', Nkiru has shown that she is the unsung African queen of the movie.

The fair-skinned role-interpreter has released some pictures, which from all indications, shows how pretty the movie star is. The actress showed a more sophisticated, refined and rejuvenated Nkiru Sylvanus, who is poised to keep the world thirst for more with her exclusive talent.

Meanwhile, it has been disclosed to us that Nkiru is set to take her movie to the United States of America (USA) for premiere. She is reportedly taking this step due to popular demand from her fans over there. The event will take place in September 2014.