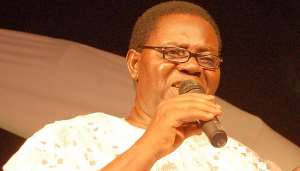 This is coming on the heels of various publications on the social media describing his conferment as illegal with the accusation that the University lacks a music department.

Despite the controversies, the evangelist expressed his joy and appreciation over the new honour and the appointment attached to it as a music lecturer in the institution. “There is nothing like controversy in my conferment by Olabisi Onabanjo University. I never heard that.”

Recall that on Monday, July 11, 2014, Evangelist Obey was conferred the honour of Professor of Music by the Olabisi Onabanjo University, Ago-Iwoye, ogun state, and had in attendance the likes of the Alake of Egbaland, Oba Adedotun Aremu Gbadebo, the Osile Oke Ona, Oba Adedapo Tejuoaho, Iyalode Alaba Lawson, among others.

Yvonne Okoro: Our Culture Does Not Allow Topics Like S&x And N^dity

Maheeda Mocks Catholic Church By Dressing As A Nun.(Photo​)

Why Celebritie​s Go Into Other Businesses