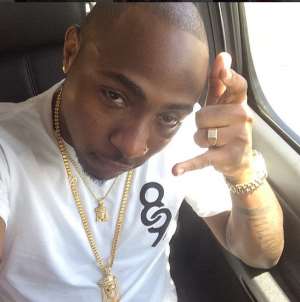 Wave making and 2014 BET awards winner, David Adeleke better known as Davido, has called on haters to stop following him on social media if they feel they are not satisfied with his way of life.

The 'Aye' crooner stated that the wealth he flaunts about is his hard earned money and as such, nobody should complain about it.

“I don't call it flaunting of wealth. It is my car, my money and it is even my page. You don't have to follow me on my Instagram,” he noted.

Davido warned that since he does that on his social page, it was his business and not other people's business since he did not put up on a billboard.

“You don't have to follow me on the social media. It would have been different if I was advertising all this on a billboard. I am not doing that,” he warned.

Latest Photo Reports
Catch up with all the political quotes from our politicians.
Advertise here
More Readers Choice
ModernGhana Links
Micah “Emeka” Richards Talks Up Nigerian Jollof As He Meets With Football Fans In Nigeria.
Nigerian Lady, Miss Mary Timms Emerges Face of NGEA in USA
Amira Ibrahim Unveiled as Judge Ahead of Miss Tourism Nigeria 2017
Maheeda Is Bad Egg To Our Society- Sandra Ifudu
And Another Date Passed Without 2014 Imo Carnival
A Must Read:Men of God in Nigeria and Divorce
Nigerian Footballer, Emmanuel Emenike At Loggerheads With Enugu State Government Over Land Issues
Solid Star Gives Me Goose Pimples’ – Tiwa Savage
I Never Cheated On My Ex-Wife—Funky Mallam
TOP STORIES