I married my fan — Uche Elendu 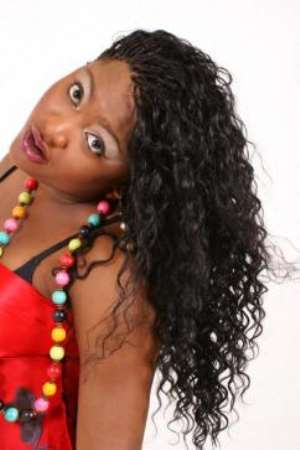 Uche Elendu I gweanyiba is not only an actress but also a musciain who already has three albums in the market. This graduate of International Relations is surely not doing badly in the acting career. In this interview with us, she talks about her marriage, career and her experience in acting with professionals for the first time. In her words, 'if not for acting, how would I have met my husband' Read on;

How is life and the acting career treating you?

Cool. The acting career is fine as well, although I've been on a little break since I got married in February. I traveled. I have not been around; I took some time off to be with my husband because he lives outside the country and I also have to take care of myself.

How is married life treating you?

Well so far so good. I am still very young in marriage but so far so good, no bitter experiences yet. And I hope it goes on like that.

How did you meet your husband?

Funny enough, my husband was a fan of mine. He just kept calling me and all that. At first I was like 'uhn…' you know the usual thing. Sometimes, he will call and I will tell my PA to pick the call and tell him that I am busy.

I did not know he was so serious. He saw me on screen and just said this is my wife and so he was bent on seeing me and getting me no matter the situation and I really gave him a tough time, but he was really bent on meeting me at all cost.

One day he actually came to my base in Owerri and that day I was less busy and bored and I said okay come over to my house, let me see who has been calling me and all that.

Then he came and got talking, I found out that he is my kind of person; very interesting, calm and all that. From there we just got hooked up 'cos we knew we were meant for each other and here we are today.

Precisely when did you get into the acting profession?

I did my first movie in 2001/2002 but after that movie, I left the industry to face my studies squarely. I wrote my final exams and after then, I came back in 2004.

What is the title of the movie?

Fear of the unknown.

How did it feel acting for the first time along side professionals?

I did not really have any stage fright or camera shyness. The experience was really nice because I was working with very accommodating people and with the way I got into acting: it was my friend's father that produced the movie.

My friend asked me to help her deliver a letter to her father, Larry Koldsweat and I went there and I met him with Olu Jacobs and we got talking and they were like, this girl is going to make a good actress.

They gave me script to read, I read it just like a joke and they said they will give me a role in their movie and incidentally, I was on holidays and I said, well let me just give it a try and I went and I did it well because I was working with very accommodating people like Edith Jane Azu, Olu Jacobs and Francis Agu of blessed memory. It was really a very nice experience and that was why I made up my mind to go into acting fully.

What is one good thing that acting has done to you?

If it wasn't for acting, do you think I would have found my husband (laughs). Sometimes I just sit down to think about it, you know.

If I was not an actress, would he have found me? But maybe he would have because God says for every woman, there is a man. So that is one good thing that acting has done for me.

Another thing it has done for me is that it has made me realize who I am because with exposure, you get to see a lot of things. If I wasn't an actress, I probably would not have known that I could handle some certain things because I would not have been exposed to them. It (Acting) has opened a lot of doors for me. Acting is my career and it has done a great deal for me.

What about marriage, what good has it done to you?

Marriage has given me a sense of responsibility. It has made me fulfilled as a woman.

So is your husband romantic?

Who is your kind of man?

My kind of man is gentle, understanding, and tolerant because I have a lot of mood swings. He also has to be God fearing and hard working and my husband is very hardworking. He doesn't give up, he always get what he wants.

Does he watch your movies?

A whole lot, he does.

How does he react to your sexy roles, when you are kissed or smooched on set?

(Laughs) It is funny because all the while I have not noticed anything different in his reactions when he is watching my movies.

But recently there was this movie I did and I was in some romantic world with a colleague of mine, we were just sitting down watching the movies and we were gisting and laughing and all of a sudden , he was so interested in that part.

I was trying to draw his attention away from the scene but he was so engrossed that all of a sudden he just became quiet and went to his room.

I did not want to talk about it so I did not know if he felt jealous about it that he reacted that way or maybe because there were other people who were probably watching to see his reaction. I really don't know. My husband is cool with my job.

He loves my job and he doesn't really have a problem with it.

Have you been faced with any embarrassing situation for playing a particular role in a movie?

I can remember one occasion after I did a movie titled 'Last Occult' where I played a very occultic witch goddess. Then I was talking with a friend, I was actually kidding with her.

I was telling her that I will deal with her and behold a woman emerged from no where and called her to a private discussion warning her to be very careful with me that I am a very dangerous person.

She told her that I am a goddess of an occult that I could actually harm her that she saw me in the movie that I did and she knows that if I do not have anything to do with occultism, I would not have been able to act that part that well. My friend and I started laughing when she told me, but I did not find it embarrassing because I expect things like that from fans.

How many movies do you have to your credit?

Sincerely I have lost count but I know that I have more than fifty movies to my credit.

When you started out on your acting career, were your parents supportive?

My mom was supportive from the start but my father at the beginning was not very happy about it. When I did my first movie, my mom and I kept it to ourselves. We did not tell my father because he was transferred to Port Harcourt then while we were in Lagos and I begged my mom not to tell him. So I went and shot the movie.

When the movie came out, my dad was at home one day watching TV and he saw its preview and saw somebody like me and he was like, 'is this my daughter? No, it can't be'. And because there was no hint; he never suspected anything like that until he saw the big banner in Port Harcourt and he saw my face there.

He called me and asked me if we did any film in our school because he felt I would not leave school for anything.

Then I had to tell him the truth, then he spoke to my mom and he was not happy about it. That was why I had to go off the scene after my first film before returning in 2004. After I finished and he saw that I am becoming successful in what I do, he did not have a choice than to support me and now they are both in support of everything.

What is your view on sexual harassment?

There is sexual harassment in every sector of life. In the banks, corporate world, any where you can think of.

It is there. It does not only happen in Nollywood. I've never experienced any although I have been hearing of it.

I don't also see it working because after sleeping with whoever to get the role and the person is not good enough for the role, nobody will want to throw his or her money away because of some minutes of sexual pleasure.

So whoever is playing a role has to truly merit it. The person has to be able to deliver and sell the movie. Many different people work on a movie; like the director, producer and all that so it will not work because movie making is not a one man thing. I don't believe in sex for roles; I don't think it works.