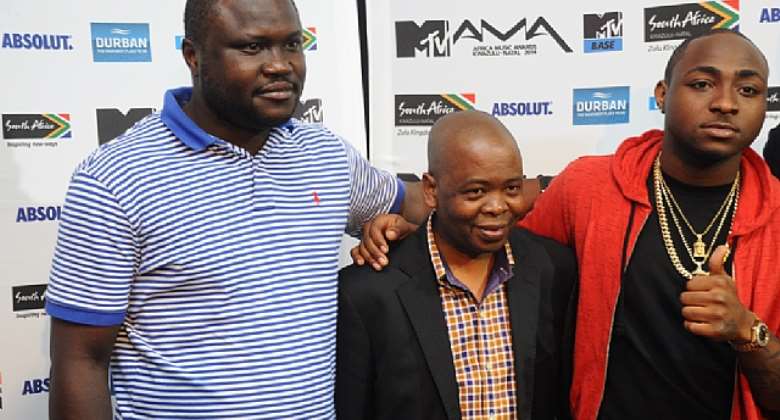 LAGOS, Nigeria - As part of its contribution to the development of creativity and entertainment in Nigeria, Absolut Vodka recently supported the successful organization of the Lagos 'Road to MAMAs concert. The event which took place at the Marquee, Federal palace Hotel, Victoria Island, is part of a pan-African club tour to the city of Durban in South Africa - venue of the 2014 MTV Africa Music Awards. It was a celebration of top class entertainment mixed in Absolut fun and signature cocktails.

The concert paraded an all-star line-up of the hottest MAMA nominees which included Davido, Mafikizolo, D'Banj, Olamide, KCee, Harrysong, Burna Boy, the MAVIN crew and Chidinma who thrilled party lovers alongside superstar DJs like DJ Obi, DJ Humility and DJ Spinall. This year MTV Africa Music Awards has a new category - the 'Transform Today Award' sponsored by Absolut Vodka which creates an opportunity to celebrate the power of young individuals to transform the image of Africa through their creativity and vision.

Speaking during an interactive session with the media, Akintayo Akinseloyin, Brand Manager, Absolut Vodka Nigeria said, 'We are supporting creativity and transformation in young peoplewhich remains the pivot to partnering with the MAMAs. The Absolut brand is poised to inspire consumer transformation with exciting experiences and this we have shown by giving individuals free VIP tickets to watch the MAMAs LIVE in South Africa.'

Part of the transformation witnessed at the Lagos Road to MAMAs event was the novel real-time interactive tweet-wall, where consumers and fans of Absolut had back-to-back engagement with the brand. Several consumers walked away with gift prizes - the Beats by Dre headphones which got them dancing till the break of dawn.

The 'Road to MAMA' showcases events in Lagos - Nigeria, Durban - South Africa and Kenya, Nairobi featuring MAMA nominees alongside the most current local artists and DJs. It is a celebration of African musicians and achievers who have made the most impact on the contemporary music scene throughout the year.

Furthermore, the MAMAs will feature stunning performances from African and international artists with signature collaborations between artists of different genres and cultures. Artists will be recognised in thirteen different categories including Best Male, Best Female and Best New Act. The 2014 MTV Africa Music Awards will premiere on MTV Base (DStv Channel 322), MTV (DStv Channel 130) and other partner channels around the continent from June 2014.

The 2014 award is open to all artists whose music videos have received airplay on MTV Base (DStv Channel 322) or MTV (DStv Channel 130) during the qualifying period. MAMA was first staged in 2008 and it has recognised the talents of musicians from across sub-Saharan Africa, rewarding iconic artists like 2Face Idibia, Big Nuz, HHP, P-Square, Liquideep, Lira, Nameless, Wahu, Fally Ipupa, Cabo Snoop, Mo Chedda, Zebra & Giraffe and many more.

Finally, consumers of Absolut Vodka can vote for their favourite Nigerian music video director - Clarence Peters in the 'Transform Today by Absolut' category of the MAMAs at www.absolutmtv.co.za and also visit www.facebook.com/absolutvodkanigeria or follow on Twitter @AbsolutVodkaNig to share their signature cocktail for an Absolut experience.

Hottest Photo Reports
Catch up with all the political quotes from our politicians.
Advertise here
More Celebrity Picks
ModernGhana Links
Liya's EP Is Not For Now But You Might like It
Introducing Nissa Seych
Sensational gospel singer, Ese Bliss Biography and Promotional photos
Tiwa Savage on The Zane Lowe Show
Pempe; An awakening of Sisterhood with Seyi Shay.
Meet Abuja Celebrity Photographer, Prince Cyril Ajom
Actress Bianca Ugowanne Thanks Nollywood Producers For Constantly Believing In Her Brand
There Is A Need For Creative People To Venture Into Business---Faithia Williams
Uncovering The Notable Capacity Impact Of Alex Mascot Ikwechegh, Nigeria Politician, Businessman And Philanthropist
TOP STORIES