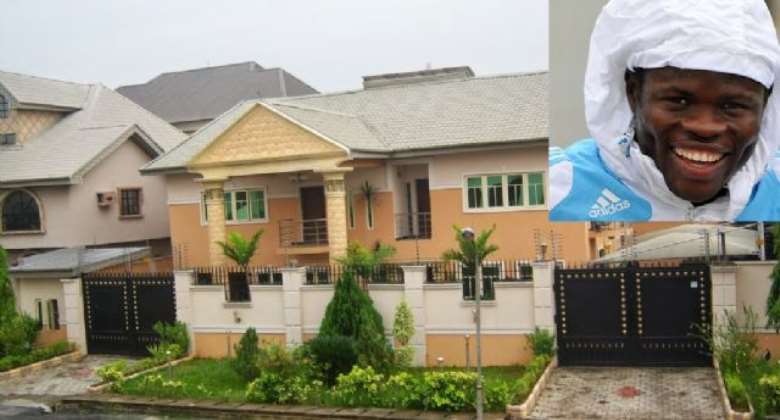 Life is not all about making fame and living large, but it's all about bringing other people closer and rendering a helping hand.

These were the encomiums poured on Nigeria's abandoned defender, Taye taiwo by his neighbours around his Festac town residence.

According to Taye's neighbours, he is an easy going and generous fellow and he jogs or cycles anytime he's in town. They also added that the player is not arrogant as he could be perceived to be and he relates well with people anytime he is around.

The footballer who currently plays for Bursaspor F.C allegedly bought over the property that was there before for about N30 million and then renovated it to suit his taste.

Neighbours attested that since the player acquired the property some years ago, people have been seen going and coming out of the premises with smiles on their faces.

Taye Taiwo, though has not been part of the Super Eagles squad for some time now and currently, is not part of the Brazil 2014 world cup squad, has always proved his worth in every club he plays for and is always ready to attend to National duty when call upon.

Latest Photo Reports
Catch up with all the political quotes from our politicians.
Advertise here
More Readers Choice
ModernGhana Links
Micah “Emeka” Richards Talks Up Nigerian Jollof As He Meets With Football Fans In Nigeria.
Nigerian Lady, Miss Mary Timms Emerges Face of NGEA in USA
Amira Ibrahim Unveiled as Judge Ahead of Miss Tourism Nigeria 2017
Maheeda Is Bad Egg To Our Society- Sandra Ifudu
And Another Date Passed Without 2014 Imo Carnival
A Must Read:Men of God in Nigeria and Divorce
Nigerian Footballer, Emmanuel Emenike At Loggerheads With Enugu State Government Over Land Issues
Solid Star Gives Me Goose Pimples’ – Tiwa Savage
I Never Cheated On My Ex-Wife—Funky Mallam
TOP STORIES