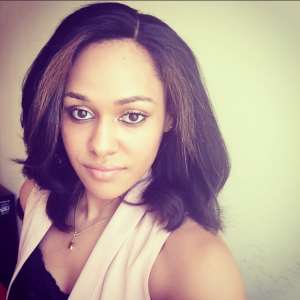 With the way things are presently going, Tania Omotayo, reported estranged girlfriend of sensational music star in Nigeria, Ayodeji Balogun, better known as Wizkid, may be enjoying the spotlight, which has made some to conclude that she is desperate to become a star in Nigeria by just being the 'ex-lover' of the Star Boy boss, Wizkid.

Since their reported breakup, Tania has been seen with some top celebrities in Nigeria. At a club, she was with Don Jazzy as well with others.

Last week, the beautiful lady went on Instagram promising to give out the sum of N300,000 to two lucky fans, but on the condition that they must own an MTN line. READ IT HERE

About 24 hours after her post, two lucky winners emerged and they were presented with N150,000 each by the lady. This has now raised several questions as to whether Tania is now an MTN brand ambassador.

From the picture taken with one of the winners, Tania and the lucky dude were standing in front of an MTN board, which was autographed.

Tania and Wizkid enjoyed the best of time together as lovers and both attended gigs together. They were also sharing their intimate pictures on the internet. No explanation is given yet as to why their romance crashed, but both parties may have moved on with their separate lives.

My Marriage Is Still Intact, We Only Have Challenges-Jenifer Eliogu

I Just Want To Make Fame And Dump Music--Orezi