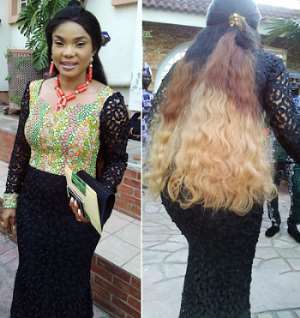 After keeping silence over his marital challenges, Nollywood actor and producer TChidi Chikere has been forced to spit fire over viral publications making the rounds about him and his ex-wife Sophia.

The Actor took to the social page to lash out his anger on his ex-wife Sophia, whom he accuses of trying to dent his image in the public instead of acting mature over whatever challenges she might be going through.

TChidi debunked the rumours that he has not been taking up his responsibilities as a father and even went as far as stating that he pays Sophia her monthly allowances even till now.

According to the producer, he accused his ex-wife of infidelity and lack of motherly care for the children. He further warned her to stay clear of his life in other for her world not to come crumbling.

Latest Photo Reports
Catch up with all the political quotes from our politicians.
Advertise here
More Wazobia nollywood
ModernGhana Links
Jo-anne Reyneke returns with new cast Owen Sejake and Motlatsi Mafatshe
Accelerate Movie Night: Here’s All That Went Down At The Accelerate Screening Of Sugar Rush Movie
Actress, Ebella Okaro Drags Colleagues to Father-in-law’s Burial
Pa Kasumu Set to Travel to India for Medical Check-up
I Need More Money—Yoruba Actress, Aishat Abimbola
I Will Soon Be Getting Married But Not From Nollywood…….Baba Suwe
I Never Wanted To Remarry, But...—Foluke Daramola
Ngozi Ezeonu For Prestigious Chieftaincy Title In Asaba
MARRIAGE IS NOT ON MY CARD NOW!! I won’t take nonsense from anyone ….Iyabo Ojo
TOP STORIES