Ortega And His Enemies Premiere 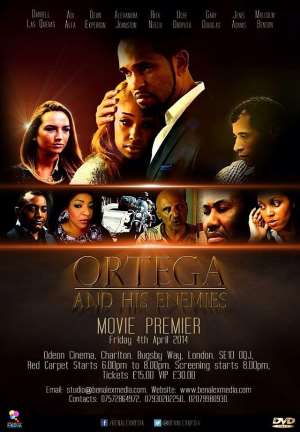 Films that will appeal to international audience in Europe, Asia, Africa and USA are without a doubt an emerging phenomenon. Benalex Media is contributing to this concept in its latest Movie Ortega and His Enemies.

BenalexMedia Production, a film company that thrives on developing world-class movies is releasing its latest film “Ortega and His Enemies” internationally in various cinemas starting in the U.K.

SHORT SYNOPSIS
“Ortega and His Enemies” is directed by the renowned award-winning director M A Benson, also the producer and director of (“Forget The Pact” and Phantom of Fury”). The story is an original and intriguing British drama with some Nollywood twists. The film set in London and Essex unfolds the life of an anger management patient John Ortega (played by Darrel Las Quevas) whose world is torn apart when he cannot manage Sara's adversaries (his fiancé played by Adi Alfa). With deceit, brutality and police chase, will John be able to overcome the forces of antagonism from DC Martha, Maxwell Toby, Sara's step dad, the cross dresser, ex police officer, The manipulative Lee (played by Alexandra Johnston) a vengeance seeking single mum and Franklin Macintosh (played by Dean Ekperigin), Sara's ex boyfriend who would not take no for an answer. With these enemies' individual evil plot against John, will he survive and still make it to the altar with his soul mateSara?

The Premiere begins at 9pm and concludes with a Q&A with the stars and filmmakers. After Party to be announced at the premiere

Journalists and Press photographers are invited to cover the arrival of invited guests as well as conduct filming and radio interviews. Email [email protected] for Press accreditation.