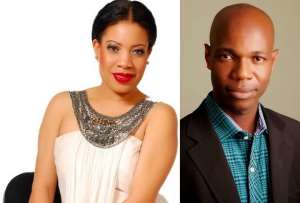 A former Editor with Monalisa Chinda's newly launched magazine, 'Monalisa', Kelvin Keshi has dragged the actress to court. Kelvin, who has been in a war with his former boss alleged Mona, as the sultry actress is fondly called, of slander.

He claimed that the screen diva defamed him in an interview she granted City People in 2013, by calling him a 'half-baked journalist'.

Kelvin, in a lawsuit tendered by his lawyers, Megafield Solicitors, frowned at Monalisa's statement in the interview and handed out a legal suit notification to the actress on behalf of their client. Read it HERE

Meanwhile, Nollywoodgists.com contacted Monalisa's publicist, who confirmed that the actress is aware of the lawsuit.

According to her publicist, "Yes, she's been served and her lawyers are dealing with it appropriately."

"The Kelvin guy is only trying to take advantage of Lisa's (Monalisa) status and soft hearted nature because he's got nothing to lose," the publicist told Nollywoodgists.com.