U.S Website Scolds Mariah Carey For Coming To Perform In A Country Full Of Fraudulent Acts 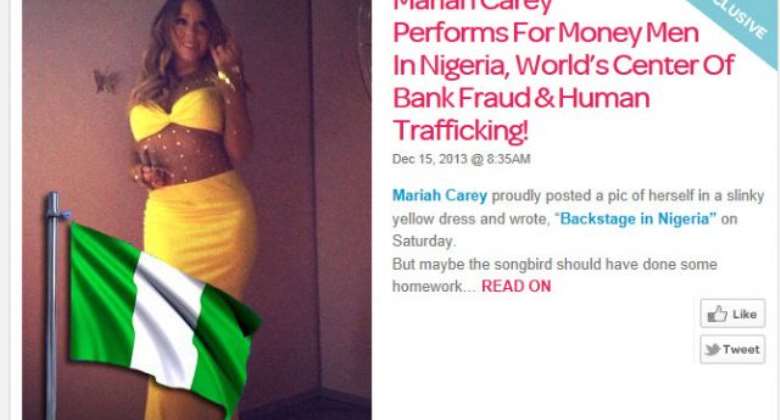 After Mariah Carey performed in Nigeria and posted a picture online saying “Backstage in Nigeria” lots of comment has raised both from the side of those who invited her and from her own side, but the truth is that she isn't the first performer who has taken a paycheck for appearing in countries known for performing in Nigeria, other artiste has found their way to perform in Nigeria like Chris brown and some others.

But recently a United States gossip site Radar Online yesterday scolded Mariah Carey in an article posted on their site, saying she shouldn't have accepted to do a gig in a country known for 'terror, death and fraud'. What nonsense, they can talk when the US is the number one crime capital of the world. Read the Radar Online article below... on Saturday.

But maybe the songbird should have done some homework before agreeing to the gig?
Her show was at Access Bank's Christmas Party which was also a farewell bash for the bank's managing director. And while Access Bank is a reputable financial institution, should Carey have known a few basics about the African nation before taking the paycheck?
Ironically — given that she was performing for bankers — it seems Carey wasn't aware Nigeria is well-known as the center of the world's email financial crimes! Nigeria is even part of the name — as in “Nigerian 411 Scams.”
Nigeria is also, according to the United Nations, the hub of human trafficking as “a source, destination and transit country.

AND, just for good measure, there are mass killings going on in two Nigerian states right now, and according to Human Rights Watch, the violence is being ignored by federal authorities.

Shocking that citizens of other countries are scared of our country and that's why they are against her for risking her life to perform in such a country like ours.

“Systemic corruption in the Nigeria Police Force” is the problem, a HRW spokesperson told CNN.