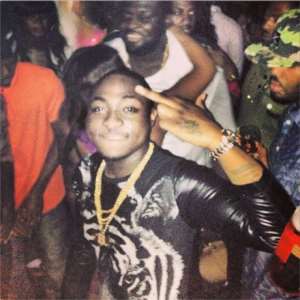 It was a shameful scenario this morning at Nu Grotto, a club located near Cool FM in Victoria Island, Lagos, as a bouncer attached to controversial pop singer, Davido allegedly beat up the club's bouncer and DJ, destroying some properties of the club in the process.

According to what we gathered, Davido was about leaving the club when the club's DJ identified as JD picked up Davido's ATM card, which had fallen from him unnoticed, and then tried to hand it over to the singer.

As the DJ tried to get close to the singer to hand over the ATM card to him, he was stopped by Davido's bouncer. This infuriated the DJ who then reportedly insulted the bouncer, which resulted into him getting some slaps from the angry bouncer.

The bouncer didn't stop there as he went on to allegedly beat up the club's bouncer identified as Big Sam, and thereafter allegedly destroyed some drinks on the club's shelves. Four guests at the club were reportedly wounded in the incident.