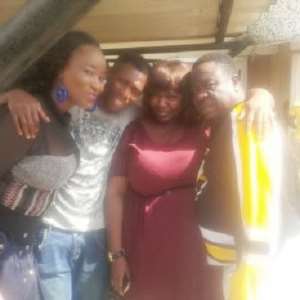 Romantic relationships between Nigerian footballers and Nollywood actresses are not new to many Nigerians. It is even common for Nigerian actresses to flock around Super Eagles stars due to their loaded pockets, especially those who ply their soccer trades in Europe.

Uche Jombo was once rumoured to have dated one of the Uche brothers for some years until she was allegedly dumped by the 'sharp striker'.

Though the list of actresses who have dated footballers may not be endless, however, those that have warmed the beds of Nigerian football internationals can be termed as many.

For up and coming Nollywood actress, Nkem Ikeh, she is presently being trailed with an alleged sizzling romance with Super Eagles new-boy, Nnamdi Oduamadi.

According to gist making the rounds in Nollywood, the chocolate-skinned actress is allegedly rubbing body with Odu, as the striker is fondly called by friends.

We gathered that the duo have been helping each other to keep their bodies warm when nature calls. It was further learnt that shortly after arriving Lagos from Sunday's crucial match with Ethiopia, Nkem reportedly zoomed off to Odu's house in Festac to give him the 'welcome apple'.

Rumour mills said even though Odu missed few vital chances on the field in Addis Ababa, he didn't fail to destroy every goalkeepers that almost prevented him from scoring at his alleged lover's 'Stanford Bridge', as he allegedly brought down the stubborn 'bridge'.

He was also reportedly later seen with the actress on a movie location in Festac, where she was filming at.

Odu plays in Italy for a Serie B team.