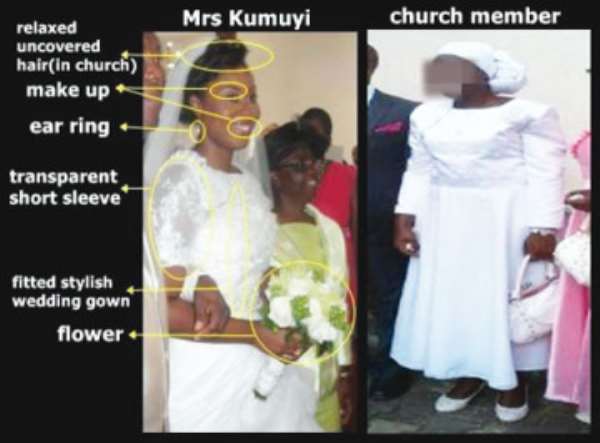 The controversy generated by the marriage of the second son of the General Superintendent of the Deeper Life Bible Church, John Kumuyi, to former Miss Love Odih, has taken a new dimension.

In the wedding pictures that circulated online, the bride, who is the daughter of the National Overseer of the church's branch in Jamaica, was seen putting on a more "sexy wedding gown" when compared to that of an ordinary Deeper Life church member...

She also wore ear rings, holding a bouquet and applied make-up — all of which are alien to Pastor Kumuyi's Deeper Life church doctrines.

John and Love got married on June 15 but the ceremony had been a subject of debate on social media over how the bride was dressed, in comparison to other weddings held in the church. The church's belief does not entertain flamboyance in such celebration.

Anyway, the the couple has tendered a letter of apology to the church and all those who are not happy that they didn't abide by the doctrine, which other church members abide by, saying we have “realised the effects of our actions and omission".

The letter was read to the congregation on Saturday during the church's mid-year celebration programme held at the Deeper Life Conference Centre, Lagos-Ibadan Expresway and broadcast live to branches all over Nigeria and parts of Africa via satellite read:
“John and Love Kumuyi write to express our deepest and most sincere apology for the turn of events, that have resulted on our traditional and wedding ceremonies, that took place in Jamaica on 13th June and 15th June, 2013 respectively.

“We unreservedly and wholeheartedly state that we did not intend that our acts or omissions will, in any way, undermine the great works that God has done through the Deeper Christian Life Ministry worldwide and more specifically, through our Father in the Lord, the General Superintendent.

“We also use this medium to profusely and sincerely apologise to the General Superintendent for the embarrassment and heartaches, our actions have caused him, more so that he has earlier declined to be at the events.

“This, notwithstanding, we fully accept that having been nurtured, taught and brought up with the sound teaching of the word of God, we should have been able to draw the line, which we failed to do.

“We have now realised the effects of our actions and omission and do plead with the church for forgiveness and also appealing that any action that should be taken be directed at John and Love, as we take this time to prayerfully reflect on our actions. We take full responsibility for what happened, and this action should, in no way, be blamed on the GS, or the leaders of the church in Nigeria, United States, Jamaica or United Kingdom and beyond.”

However, their apology has attracted another debate. Some say there was no need for the apology as his wife wore what pleased her, while others say the apology is in order.

So, look at the two different photos above, what is your take?

More On The Kumuyi's

At 34,Genevieve is still looking this beautiful

I Don't Have Time For Marriage But My Album--Weird MC

Election 2020: You'll have ‘fugitive’ president should Maham...
13 minutes ago