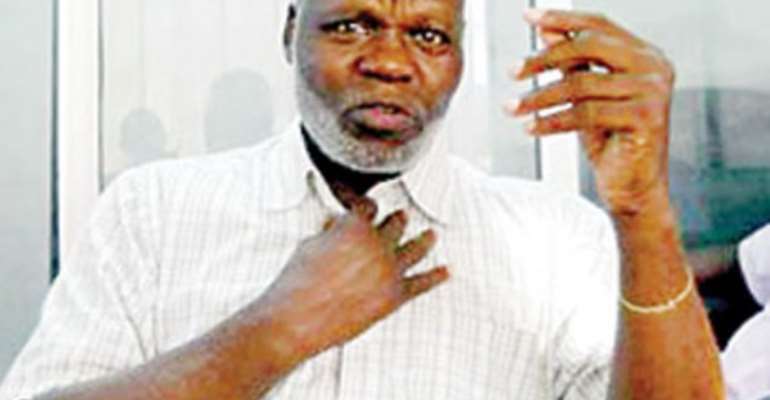 A former World Boxing Federation title holder, Bash Ali, caused a scare at the National Stadium, Abuja on Thursday in his desperate bid to get the attention of President Goodluck Jonathan.

Jonathan was at the stadium to inaugurate a youth campaign, Rhythm 'n' Play, aimed at enhancing mass youth participation in sports activities and age grade competition.

Immediately after the President delivered his speech and was making his way out of the Velodrome venue, Ali, who has been appealing to the Federal Government to support him in the staging of a world-record boxing fight to be hosted by Nigeria, started moving towards him.

When the boxer discovered that the President did not notice his gesture, he raised a placard and moved desperately towards him.

As he moved to run towards the President, a security agent stationed near him quickly held him.

The attention of dignitaries, who attended the event, including the President, turned to Ali while he was struggling desperately to break loose from the security agent's firm grip.

It was at that point that the President asked that the boxer be allowed to approach him.

Ali engaged Jonathan in a discussion in hushed tone for about three minutes to the bewilderment of dignitaries who were already standing to see the President off to his car.

It will be recalled that Ali had on May 20 staged a protest at the national headquarters of the Peoples Democratic Party in Abuja in pursuit of his bid.

He was said to have been locked out of the premises alongside his supporters.

Ali had been using every means at his disposal to protest his failure to get the Federal Government to support him in staging a Guinness Book of World Record bout.

The Thursday event was attended by the National Chairman of the PDP, Dr. Bamanga Tukur; Governor Emmanuel Uduaghan of Delta State; Deputy Governor of Oyo State, Moses Adeyemo; Deputy Governor of Ondo State, Ali Olanusi; and members of the Federal Executive Council among others. And they all witnessed the drama caused by Ali.