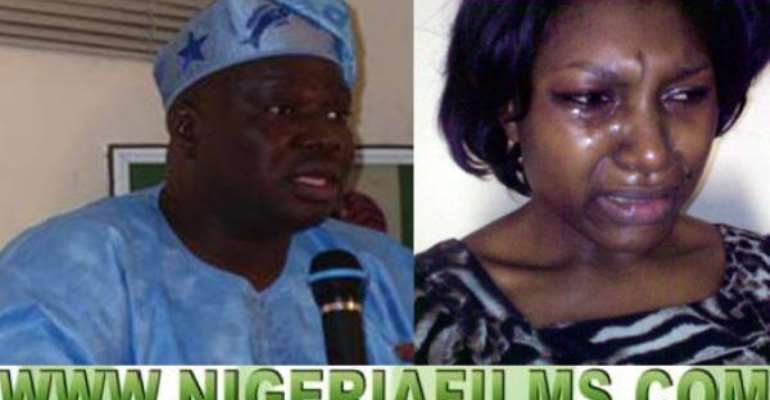 Let us be sincere. Ufuoma Ejenabor – Mcdermott is one of the most beautiful actresses in Nigeria. Also endowed with a delicious shape, the delectable mother of one who speaks soothing English and refreshing French also knows when to stand up and fight for her right. Ebony-skinned and gap-toothed, dimpled – faced and sonorous-voiced, AZUH ARINZE encountered her weeks back at the departure lounge of Akwa Ibom Airport. They chatted for some minutes and below is the outcome…

What do you like most about being an actress?

I think it's just the ability to do the things you like to do and have fun doing them and as an addition, get paid while doing them.

Everything has its pros and cons. I can't buy boli and groundnut by the road (Laughs).

What is your definition of acting?

It's the portrayal or bringing to life of a character – it could be a fictitious or a real life character. But the whole idea is, a director has something in his head; there's a foresight that he has and if you as an actor can bring to life whatever message he sees in his vision, then that is acting for me.

Honestly, I don't know. I think I came into acting just trying to stall time because I had finished my 300 Level in the university – and because I went to do my year abroad. I studied French, so I did what we call The Year abroad, in the French Village, Badagry. By the time we were ready to go back on campus, there was this long break and my mates had not finished their own 300 Level, so I was just at home and I was bored. Before then I had met Zeb (Ejiro) who asked me to try my hands on acting. But I wasn't interested. So, I just felt okay, I'm gonna be at home for maybe another 6/8 months, you know, I might as well just give it a trial. It started, then I liked it.

What is the greatest thing that acting has done for you?

It opens doors. Because people seem to or tend to recognize you, it gives you a pedestal on which to stand. Also, sometimes you are on a higher pedestal than those who are not too recognized. It kind of opens doors and it helps make things faster.

What has acting not done for you?

I think it's the fact that people think because they see you, they know you. That, for me, is amazing. But maybe I should say the biggest thing is that people tend to forget you are human. They think sitting in your living room and you see this person, he either makes you laugh or cry and then you automatically feel that you know this person. So, most times, you almost want to remove the human factor from this actor that you see on TV and it's almost impossible for you to separate what you see on TV from the real life character.

Which of your movies do you have fond memories of and why?

What are the disadvantages of being very beautiful?

There was a time in my life when I once felt there were disadvantages of being beautiful – but I will attribute it to immaturity. Right now, I have come to realise that whatever it is that God has deposited in you is for a reason and it's left for you to be able to harness those things and use them for the purposes for which they were given to you or use them to the level to which they attract goodness to you. It's very easy for people to see certain characteristics in you and use them negatively or tend to think of the negative. But I think that it is left to you. Nobody can define that character for you. If that thing, that talent or characteristic has been deposited in you, it's left for you to realise, try to work out why it's there, why it was given to you. I must say that now that I'm a lot older, I treasure the fact that I can look at myself in the mirror and I will not puke (Laughs).

How is motherhood? How have you been coping as a mother?

Ah! It's beautiful! It has its ups and downs, then it has its stress. Sometimes you feel weary, but the all in all is, the thought of just knowing that there's someone else growing in you, and you are able to replicate or bring somebody to life. It's amazing. I think it's one power that God has given to women and I think it's one of the greatest powers on earth. The ability to bring forth life. It's sweet!

Tell us about your baby…

He's so cute. You can have him for breakfast, lunch and dinner and throw him up, throw him down. His name is Isiojared Mcdermott.

Tell us about your husband…

There isn't much to tell. One of the things I try to do is…God blessed me. I'm from a very wonderful and understanding family and one of the things I've come to understand is that respecting people's views would always make sure that you live well. You live together and you are not stepping on each other's toes. I chose this line, I chose this pathway, my family didn't and it would be very wrong of me to try to drag them in. So, my husband is a very, very private person and I would respect his view, his choice of remaining private. But he's a very caring and loving person and I love him to bits.

Did you set out to marry a white person or it just happened?

Noooo! Not at all! I don't think anyone ever sets out to marry whoever it is they end up with. Life has a way of happening to you and I will just put it plainly that way – life happened to me and I'm glad it did!

People say that Isioma is very, very stubborn. Is that correct?

Who are the people?

Those that witnessed the palaver you had with Hon. Adeyemi Ikuforiji, Speaker, Lagos State House of Assembly? They said you must be very stubborn and strong to have gone into that battle with him…

Stubborn and strong are two different words. You have to choose one, let's know what we are talking about…

A lot of people felt as a woman, you would have been scared to engage his convoy in such drama; that you should have chickened out, etc?

Why the word, chicken? Why? Why must a woman chicken out? No, I'm trying to get them. It's not you. You are just bearing a third person's point of view, but I would like to sit down with these people. Why should a woman chicken out? If somebody tells me that, maybe I will know where I'm going…

Let's talk about other things. What's the nicest thing you've heard about yourself?

I don't take anything to heart. The truth is whatever it is about myself that I need to embrace, trust me, that's to come from me. It doesn't matter what level of niceness you throw to me, I take everything with caution. So, I can't even remember because I will probably just say thank you. But the best thing I've probably heard about myself has come from me. It's very innate. Yes!

What's the worst thing you've heard people say about you?

Away from work, what do you do for relaxation?

You look very, very good for a woman who had a baby not too long ago. How did you do it? Because the last time we say when I was going to London and you, USA, you were very big?

Yeah, I had to work out, I had to do a lot of work out after having my baby…I had to work out. I didn't just stay there. I put on some weight, but not much really. After I had my baby, I put on a lot of weight and when I was done with breast feeding and everything, I knew that I had to get back in shape. So, I do a lot of dieting and a lot of work outs and one of the things I've done now is to embrace work out, so that it's part of my life. Everyday, burn a few calories here and there and allow for my junk eating which I do a lot.